Where the hell have I been, etc 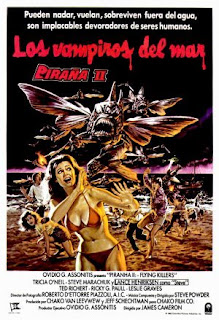 What a way to start the year. My computer went down earlier this month with a multitude of viruses. I still hope to have it back, wiped clean, sometime soon. In the meantime, I’m writing this thing at work (after hours, I may have a crappy work ethic but it’s not that crappy). Anyway, I promised you guys a list of my five worst films of 2008 so here it is with minimal, if any, commentary.

Fuck man, it feels like that came out in 2005. I also sorta hated, but mostly just felt too indifferent about to include on any “worst of” list; The Happening, The Spirit, The X-Files, The Mummy: Tomb of the Forbidden Kingdom, and Indiana Jones.

James Cameron has a thing for sequels, especially if he didn’t direct the first one. Aliens is pretty good. The first one, aptly titled Alien, is about one alien with several large teeth. While one alien probably wouldn’t stand a chance against a platoon of space marines it’s more than tough enough for a rag tag crew of space janitors or whatever it was they were doing out there. Which is why Cameron wrote more than one alien into the sequel. Also, a big fucking queen alien. He knew that one alien versus a crew of space marines would be a pretty short, uneventful movie. The genius even called the thing Aliens.

Piranha 2 is Cameron’s first movie and let me tell you it’s no Aliens. I don’t remember if I saw the first Piranha or not. I’m guessing I did since I ate this kinda shit for breakfast as a kid. Is that the one where Richard Pryor tries to cross the river and the piranhas eat off his pants? That shit was hilarious. Anyway, Piranha was directed by genre stalwart Joe Dante (Gremlins, The Howling, The Burbs) and also written by John Sayles (Aligator, Brother From Another Planet) so I’m going to go out on a limb and assume that it is pretty good. Well, James Cameron is arguably a better filmmaker than Dante but I would argue that Piranha 2 is not a better film than Piranha (which I arguably have not seen so that's some argument).

One thing I did like about this picture however was the pre-title sequence. Fantastic. We see a young couple out in their boat. The woman says something like “let’s do what we came out here for”. Then we see them scuba diving towards a shipwreck. Yes, they are investigating a shipwreck, maybe searching for lost gold or some shit. Now we can begin to understand why Cameron has such a hard on for the Titanic. Anyway, suddenly the broad has removed her bathing suit and she bears down on the man. He seems stunned. She removes the knife from his ankle sheath. Is she going to murder him and take the treasure for herself? Why is she naked? (One should learn never to ask such questions). Wait, she’s just cutting off his speedo so they can do it underwater. I’ve heard women can’t get pregnant underwater. It's a scientific fact. Then we are treated to the point of view of some, at first, unseen entitie(s). Unfortunately, Cameron shows all his cards way too early as those little underwater flying fuckers start eating and the ocean turns red as the title comes up. Suspense flushed down the shitter.

The picture stars Lance Henriksen (every movie made after 1980) as a sheriff in some small Caribbean town. In support of Henriksen are a bunch of other people I'm not familiar with, several of whom get naked. I guess the difference between this picture and the first one is that these piranhas have been genetically altered so they can fly. Some sort of military experiment I guess. Basically, we have the sheriff, the asshole resort owner who refuses to postpone the annual fish fry, the ex wife/scuba instructor, the son who gets in over his head, and the native that fishes with dynamite. The flying fish effects are bad. Cameron is lost without a budget. There are a couple of incredibly mean spirited bimbos (who thankfully get naked) who try to steal food from a mentally challenged man and then invite him on a leisure cruise only to dock their boat just far enough from the pier that the poor bastard can’t get onboard. The poor horny son of a bitch tries to jump on, but misses wildly and gets called an asshole by the two teasing broads for his troubles. Their comeuppance is coming.

The picture’s best effect was, strangely enough, ripped off from the original Alien when a piranha that had burrowed itself into a dead guy bursts out of his chest during the autopsy. Henriksen is pretty solid but not really given much to do except pine for his ex-wife and look for his son. Upon finding the kid, who by the way is at one point shown making love to a young lady in a waterfall (that son of a bitch is barely fifteen!), he makes the curious decision to put his helicopter in neutral and ditch the thing into the ocean. Henriksen’s ex-wife looks like Adrienne Barbeau which is the best thing I can say about her. Cameron liked her enough to cast her as “woman” in The Titanic. The fish fry is pretty fun, but one can only watch so many flying fish before he catches himself looking for the string (not very hard to find). Cameron would eventually redeem himself before disappearing for a decade but this is not a very promising beginning.

This one was surprisingly not terrible. Starring Christopher Lambert and the incredibly cute Loryn Locklin as a married couple living in one of those futuristic dystopias that everyone loves to make movies about. In this one, families are only allowed to have one child in an effort to curb overpopulation. Failure to adhere to this law leads to imprisonment. If you’re unlucky, you’ll be sent to “the fortress”, a futuristic, privatized establishment run by a cyborgish Kurtwood Smith (Robocop). That's exactly where Locklin and Lambert get placed when they try to cover up a second pregnancy after their first child died in infancy. Due to budgetary reasons, this prison is built underground so we never really get an idea of its scope. Each prisoner has an “intestinator” inserted in their stomach which will a) give them cramps or b) explode if they don’t follow protocol. Smith holes up in his office like some sort of robotic Howard Hughes leering over the sex dreams of his prisoners before his female companion (a fem-puter) commands him to turn on the prisoner's intestinator. No wet dreams in this prison I guess. No wonder the homoeroticism runs rampant. Alliances are made and broken, babies are extracted for a special kind of bonding with machines, breasts are left unbared, etc. Since this one’s directed by Stuart Gordon (Re-animator) one can expect some pretty impressive gore and one would not be disappointed. Impressively, the movie asks many questions about humanity and "progress". Less impressively, it doesn’t even begin to answer them. The Fortress may be “run” by Smith, but it’s his female-ish robots and synthetic guards that truly police things. Jeffrey Combs shows up as the computer geek who uploads a computer virus in order to help Lambert and his wife escape. This was years before Independence Day. Tom Towles (Henry) and Vernon Wells (The Road Warrior) appear somewhat briefly. I’ve always thought Lambert a terrible actor but I was mildly impressed with his work here (once you get past the accent). The Fortress is better than Beowulf 1999.

Shit man, I guess that’s it. I was going to briefly write about No Escape (loved it) and Repo: The Genetic Opera (the poster child for overrated “cult” films) but I’ve fucking had it for today. Save some shit for next time I guess (which I guarantee will be sooner than a month from now). If I have to stay late at work once or twice a week to post an entry, so fucking-be it I guess.

Labels: 1980s, Annual Bottom Five Lists, Brian review, Horror, I own it you can borrow it, nature run amuck, sci-fi

I have the Fortress coming up- word!