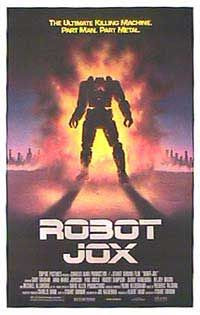 I didn't expect to enjoy Robot Jox as much as I did.  Stuart Gordon (director of The Re-animator, Dagon, Stuck) and Joe Haldeman (author of the great "The Forever War") joined forces (along with producer Charles Band) to create something that manages to work despite its paltry budget.  Basically what we got here is a gladiator picture set in the distant future where the combatants are giant robots fitted with all kinds of crazy weapons and piloted by men (and a woman).  Nuclear war has ravaged earth and out of the dust rises two superpowers; The Market (the USA basically) and The Confederation (those evil bastards from the USSR).  War has been abolished.   Conflicts are resolved in the arena.  The Confederation has laid claim to the province of Alaska (the last vestige of natural resources on the planet).  The Market objects and demands they settle this thing as if they were in Ancient Rome.  Only with giant fucking robots.

The picture is a mash up of Rocky IV, Starship Troopers, and Voltron.  We got the reluctant American hero known as Achilles (a solid Gary Graham) versus the lovably loony Russian, Jox Alexander (Paul Koslo).  Koslo has a blast as the villain.  His performance leaves the earth's atmosphere (literally and figuratively).  He encompasses nearly every Russian stereotype and does it all with a ridiculously absurd accent.  At one point, telling Achilles over drinks, "you make my vodka taste like blood."  The picture opens with Alexander destroying the robot of one of Achille's teammates in battle and then stomping on the cockpit until the poor guy is dead, cackling with delight as he does it.  The referees seem mildly pissed off as a result (yes, these battles are pointlessly refereed).  No suspension or forfeiture though.  Just a little tongue lashing.

So, we got this awesome villain and a hero in Achilles who isn't perfect.  He's a drunk, a misogynist, kind of an all around asshole.  Still, it's a tribute to Graham's performance that we actually kinda like the guy.  The first battle between Alexander and Achilles is a memorable one.  It ends when Alexander's robot launches an errant missile/giant robot hand that locks in on a few thousand spectator's seated comfortably in the bleachers.  Achilles blocks the missile with his robot chest to save the crowd.  Unfortunately, the blow knocks him backwards crushing hundreds.  As a result, spectators are barred from future contests and the match is declared a draw.  Also, Achilles retires in shame (a retirement which predictably will be short lived).

In addition to Achilles we also got a female robot jock with the code name Athena.  She's a fucking annoying character but thankfully we see her bare assed in the co-ed shower scene (predating Starship Troopers by nearly a decade).  She's cocky, hotheaded and, ultimately, incompetent especially when it comes to piloting a giant robot.  Sure, she does well enough during training exercises (including one that results in death or paralysis if you fail) but when the chips are down (i.e. ownership of Alaska) she comes up short.  Also, she pretends to be Achilles  to get access to his robot for the final fight and then proceeds to get the shit kicked out of her by Alexander.

There are other parts of this picture I liked such as the scene when a traitor is unmasked and he makes a hilarious "getaway".  The sets are cheap.  We're talking painted cardboard.  The special effects veer from the adequate to awful like the part where the giant robot foot is coming directly at the control tower window (reminded me of the shot where Jaws swims towards the underwater window at Seaworld and then Lou Gossett jr. tried to fend it off with his cane).  The robots are brought to life with what looks like a combination of model work, stop motion animation, and men in suits.  The last battle between Achilles and Alexander includes a moment where they launch their robots into space which serves no purpose other than to have a scene take place in space.  And then this thing ends just like Rocky IV minus the awkward speech.  Shit man, I had a great time with this picture.
Posted by brian at 6:18 PM

This movie is nutty as all hell. I love that in two different cases, a problem is solved by just ripping all the wires out of something.

On a related note, I saw Class of 1999 this weekend. It has gangs that take over schools- and choose to keep them open as schools? Pure hilarity.

What a coincidence. I just watched Class of 1984 (same director as Class of 1999) which has the greatest scene ever involving a table saw. Also, the vicious head of the gang is a master pianist, so we get an interesting dichotomic villain. And, Michael J. Fox is in it.