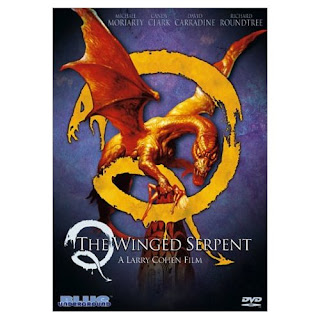 The movie stars Woody Allen as Michael Moriarty and Chuck Norris as David Carradine. What a cast, huh? Well, actually that's not Chuck Norris. It really IS David Carradine. I'm slightly less impressed. Although, I guess if it was Chuck Norris it would be a short, instead of feature length. Do you really think a flying serpent could last more than ten minutes against Norris? Also, Norris would probably manage to give an even more wooden performance than Carradine, if that's possible. While I'm being honest here, Moriarty wasn't exactly played by Woody Allen either. Moriarty is better than that. I'm sorry. Woody Allen is the Michael Moriarty of Woody Allen films. Another guy in this picture is Richard Roundtree as Shaft. Well, actually two guys play Shaft. Roundtree plays him up until the end when some other guy stands in and gets plucked off a roof and dropped to his death. No way is Shaft getting killed by a fucking bird!

The auteur behind this film is Larry Cohen. Cohen is behind some classic B horror movies from the 70s and 80s. I've only seen It's Alive III: Island of the Alive (also starring Moriarty, Cohen's Deniro). If you haven't seen It's Alive III, please do so as soon as possible. If the title doesn't sound familiar you may know it as Survivor: Mutant Killer Babies. I plan on attacking the rest of Cohen's filmography soon, including such titles as It's Alive, It's Alive II, and The Stuff. Now, I called Cohen an auteur earlier. That's not to disparage everyone else who worked on the film, but this is his baby. He gathered the money, wrote the screenplay, produced and directed the film. It's his. Ok, fuck the cast and crew.

The movie doesn't waste any time. In the first scene we see a window washer on the 40th floor of a high rise. He's pretending to clean the window, but really he's just ogling the pretty young girl in the office. He's a pervert and says "I know you love me baby", but he's also a coward because he knows she can't hear him through the glass. Suddenly, he looks up and screams. His head is bitten off by some sort of flying bird/serpent thing, I think that must be Q (I'm abbreviating it's name from now on). So, apparently, Q has a thing against perverts. Well, that's good. Maybe this is the kind of monster we can get behind? In the very next scene we see a woman sunbathing topless on top of a high rise. On top of the adjacent building is yet another pervert watching her through his telescope. Ok, pretty predictable so far. He's going to get his, alright. But no, Q swoops down and plucks up the girl in clear view of the now stunned pervert. He must eat her in mid air because pedestrians on the street are rained on. By blood. So, what the fuck? Now I don't know WHAT to expect from Q. This bird/thing is an equal opportunity people eater. Perverts and women are one and the same. I like that.

Moriarty plays a character that's down on his luck. He's nervous, can be funny, twitches a little. He's got no luck with women and can't hold down a job. He does have a girlfriend (Candy Clark), but something tells me she won't be around long. He walks into a bar to try to get a job as a musician. The barkeep gives him an audition and he goes on to play the most bizarre scat bee bop tune I have ever heard ("Evil Dream". I'm going to youtube this after the review. If I find it, I'll include a link). He mumbles his way through the audition and the bartender makes his decision when he decides to blare the jukebox halfway through the performance. What a dick. Carradine, Shaft's partner, likes the song enough from his barstool and tells him so on his way out. Moriarty replies, "what the fuck do you know?" and walks out. So, yeah, there are several little character moments like this sprinkled throughout this film. I don't know, I guess they really don't make 'em like this anymore. When you have $150 million budget, why waste time on shots that don't contain special effects? Well? Michael Bay? I'm waiting.

The movies basic premise is that an ancient Aztec goddish bird-like/serpent thingamajig has made Manhattan his home. It's nest is on top of the Chrysler building. In a sub-plot, or I guess it's more of a lateral plot, there is someone going around town performing Aztec ritual sacrifices, these include skinning and heart plucking. Are these sacrifices somehow connected to Q? Moriarty, running from the police discovers the nest of Q. Being the weasely guy he is, he blackmails the cops with his newfound information. He wants a million dollars, immunity (which is funny, because they aren't charging him with any crimes), rights to all photos/videos taken of Q, and a tax free life. Carradine and Shaft have to work against time to solve the ritual murders and kill Q, while also putting up with Moriarty's shenanigans. Basic plot in a Q egg.

What did I think of Q (the monster, not the movie). Well, it's clear that Harryhausen didn't work on this thing, but I still liked the design. What do you want for $1.2 million? I'm hoping Shaft and Carradine didn't work for scale, so the creature budget was considerably less that that. I mentioned Harryhausen earlier. So, you can infer that the creature was made using stop-motion technology. You may think I'm insane, but I would take stop-motion over CGI 9 times out of 10. There's something beautiful about stop motion. It's organic. Even when done poorly it can still create life. Q was alive, but he didn't look realistic, if that makes sense. I prefer that to the soulless CGI that dominates movies these days. The work on Q was actually very effective and it would have fit right in with a film like Clash of the Titans (if Clash were based on Aztec mythology instead of Greek with a splash of Norse). I take it back, the creature IS Harryhausen-esque. We see it in bits and pieces early on and mostly just it's shadow until the final 20 minutes or so. I'm actually amazed that Cohen was able to pull off the creature as well as he did. I mean, have you ever seen the mutant killer babies in It's Alive III? This is a long way from that.

The final battle with the creature is actually a pretty brilliant set-piece atop the Chrysler building. Moriarty finally leads the cops to the nest in exchange for his demands. I'd say there's 30 or 40 cops, heavily armed, led by Carradine. This scene is kind of the anti-King Kong. Instead of the monster on top of the building swiping at planes, we have cops shooting at a swooping bird/lizard/harryhausen-thing as it plucks them off the building one by one. Obviously, you know how it ends. The very last scene before the credits roll (what's known as the "shock moment" in these kinds of monster films) rips off Godzilla (1998), except this movie came before Godzilla I think and I don't know if time travel had been made possible for human consumption by 1982. Someone wikipedia that and let me know.

Speaking of 1982, has there ever been a better year for film? That year alone produced Blade Runner, Poltergeist, Star Trek II, Conan the Barbarian, Creepshow, The Thing, First Blood, Basket Case, Enter the Ninja, Beastmaster, Friday the 13th Part 3 (in 3-D!), Halloween 3 (not 3-D), Slumber Party Massacre, Swamp Thing, and, yes, Quetzalcoatl. Holy shit, it's my desert island collection! Hopefully, those fucking babies won't be there.

I loved Quetzalcoatl. Seriously, I did. Dan, revise your rating on netflix. This is NOT a two star film. Of course, I do have a couple complaints. Why have David Carradine in your picture and not give him anyone to karate chop? I mean, yeah, he's NO Chuck Norris, but he's still better than, say, Franco Nero. The guy was in Kung Fu for Chrissakes! I don't get it. The second complaint I'm sure you can guess involves nudity. Yeah. Not enough of it. Check this one out.
Posted by brian at 7:47 PM

I refuse to change my netflix rating. It's a two star cheese fest and you know it. It is highly entertaining though. Any movie about a giant winged monster terrorizing NYC has to be, right?
-Dan-

I don't know what you're talking about, quite frankly. Either you change your rating or I'll change it for you.

I'll rate your face if you mess with my netflix,Kirker.
-Dan-

Seems to me that any "highly entertaining" movie would be at least worthy of a 3-star score, doesn't anyone else agree?

Agreed. Dan, you just got served!
Also, I hacked into netflix and rated this 5 stars for you. You're welcome. While I was at it, I rated Good Burger 5 stars for you as well.

Please, you can't just give out 3 stars to any bad movie. Bad movies have to work hard to get that kind of rating. Q was highly entertaining but didn't earn 3 stars. It needed more gore and nudity and less plot. You want a 3 star bad movie go watch The Toxic Avenger. Its a prime example.
And go ahead and rate Good Burger 5 stars...that movie deserves 7 at least.
-Dan-

I'll be honest here. This thing probably gets 2 stars from me without Michael Moriarty. His performance was pretty brilliant and didn't allow me to get bored with the various subplots (such as the jewelry store heist). Moriarty was enough to bump this thing up 2 more stars for me.