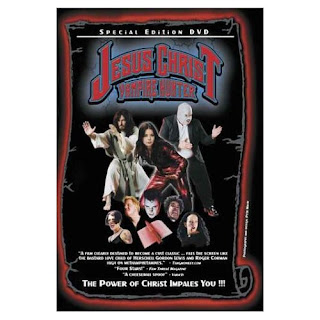 It’s all good. It’s all right. Everybody gets laid tonight!
-chorus from Journey-esque Everybody Get's Laid Tonight (JCVH theme song)

He came from heaven. Two stakes in his hand. To smote the vampires. And free the land!
-opening verse from Everybody Get's Laid Tonight

Now THIS is how you make a GOOD bad movie. This is a movie that loves its Jesus. Also, lesbians. This is the one of the better Canadian exports, ahead of Bryan Adams and just behind underage drinking.

Ottawa. 1970s. Lesbians are disappearing across the city. Meanwhile a new breed of vampires, impervious to sunlight, are popping up all over. What is the connection? Thankfully, this coincides perfectly with the 2nd coming of Jesus Christ, who wastes no time answering the call of the church. What transpires over the next 90 minutes is a glorious amalgam of kung fu (terribly choreographed), Mexican wrestling, biblical prophecy, and blood sucking mayhem.

The movie stars Phil Caracas (Harry Knuckles and the Treasure of the Aztec Mummy) as Jesus. To combat evil, Jesus joins forces with Mary Magnum played by Maria Moulton (This Movie), a beautiful babe in a one piece burgundy bike suit. This is one cool biker chick. Also on the side of good is Santo (Jeff Moffet, Harry Knuckles series), the beefy Mexican wrestler in the silver mask. I would have enjoyed Nacho Libre if it had been about this guy.

On the side of evil are Dr. Pretorius, the mad scientist who has found a cure for vampire weakness to sunlight. This cure involves the skin of lesbians (I’ll just leave it at that for now). Maxine Shreck, Pretorius’ #1, who may have a serious thing for Mary Magnum, and Golgotha, a Mod-kid vampire who supplies the muscle, round out the key baddies.

All of the characters are lovingly portrayed but let’s face it, this is Jesus’ film. After accepting his mission to rid the city of vampires, he gives himself a punk haircut, piercings, and a new wardrobe. This makeover ends with a fun scene where Jesus leads the entire city in song; “we’ll kick those vampires straight back to Hades”. The song concludes with Jesus raising a dead guy that was just outlined in chalk.

After the church informs Jesus of his mission, they provide him with money out of the collection plate to cover expenses (“it’s yours anyway”). Jesus uses the money to purchase wood for stakes. Unfortunately, on his way home, he is ambushed by atheists. Hundreds of them. “We’re taking your 2nd coming ass down”, to which Jesus replies, “Let’s get on with the conversions!” This fight scene is charming, if terribly choreographed. As Jesus kicks atheist ass, they keep pouring out of a tiny jeep (like a clown car). Jesus has one kung fu move that he uses repeatedly, where he pulls a guys shirt over his head and knees him in the face. Surprisingly, at ten minutes, this scene took about six before it started to get old.

Dr. Pretorious is a nice character that likes to lather himself in skin and intestine. Don’t worry, the gore is hilariously fake, what looks to be painted plastic and rubber. As I mentioned before, he has solved the problem of vampire sunlight sensitivity by grafting new skin over the old. They use lesbians because as Dr. Pretorious says, “No one will miss them”. I beg to differ, but this being Canada, maybe they have too many lesbians (if that’s even possible). Golgotha, while serving as the muscle also functions as a delivery boy (“I’ll bring you a lesbian in 30 minutes or it’s free”). My favorite scene of the picture takes place at a Lesbian Drop-in center, also known as a skin farm for vampires. One particular dorm room in this facility features the poster from the movie …But I’m a Cheerleader! Jesus and Mary arrive too late to save the lesbians, but still manage to engage in a fun rooftop battle with Maxine and Golgotha. Unfortunately, Golgotha beats the shit out of Jesus, while Mary is converted to the dark side by Maxine. Jesus, a bloody mess, stumbles home begging for help, but the people turn their backs to him (including a priest and a cop). Won’t we ever learn?? Finally, a spanish speaking transvestite hooker offers her assistance.

Jesus may be rattled, but he is certainly not finished. One night, over dessert, his father talks to him through his ice cream and cherries; “You need help Jesus. I have not forsaken you”. God then tells him to find Santo (the Mexican wrestler) and to also call his mom, she misses him. Later, his mom talks to him through a Virgin Mary light fixture.

As much as I liked Jesus in this movie, Santo was still my favorite character. The instant Santo lands in Ottawa, the paparazzi are hounding him, while they completely ignore Jesus. Santo, whose face remains hidden for the entire film, tells them “make sure you get my good side or you’ll get on my bad side”. Santo comes with a frumpy blond assistant named Gloria Oddbottom. Her bottom's not odd, it's just big. She’s NO Mary Magnum, that’s for sure.

Jesus Christ Vampire Hunter features a bee bop tune that rivals, but does not surpass, Michael Moriarty’s in Q. It’s performed by Blind Jimmy Leper, “the man you came to see, can’t see you”. Jesus and Santo have great seats to this performance, in the Dominion Tavern, and at one point Jesus is called up to perform. From his new vantage point, he notices that the tavern is actually full of vampires. What follows is a brouhaha of epic proportions which includes drum stick impaling, crutch impaling, death by garlic breath, and thee old head bashing routine. The bar scene even includes a fun, old fashioned toilet battle. Unfortunately, Santo and Ms. Oddbottom are taken hostage as a result of the melee.

Like many great films, this one comes down to a battle royale in a junk yard. Jesus, now captured by Mary Magnum (vampire), is chained up between two cars going in opposite directions. Santo is “on the ropes” as well. Jesus tells his assailants about their plans to commit “deicide” that “my death was never meant to be the end of the story”. Well, guess what, Jesus doesn’t die here. At one point, while Jesus is kicking ass at the junk yard, he simultaneously shows up to kick Dr. Pretorious’ stunned ass miles away. Pretorious, watching the footage from the junk yard on TV, feels his eyes must be deceiving him. Jesus’ response is “I’m everywhere!” During this battle, Jesus cuts Pretorius’ throat only to heal him immediately. He then continues to beat the crap out of him, fueled by the Rocky-esque score.

Obviously, we know who wins the battle. I won’t tell you if Jesus ultimately lives or dies, but I will tell you he doesn’t get THE girl. See, after healing Mary Magnum, it’s apparent that she’s always been a lesbian and now she has the hots for Maxine Schreck. Jesus must settle instead for a little grab ass with Santo’s chubby assistant.

I haven’t even mentioned the Sermon on the Mount part 2 where Jesus implores his children to “make up your own mind. Don’t follow me, follow my teachings”. Suddenly a cell phone goes off, interrupting the oration. An embarrassed Jesus realizes it’s his own.

The makers of Die You Zombie Bastards could learn something from this picture. These filmmakers loved their characters and actually presented them in a story worth telling. The movie was made this decade, but looks like it was made and set during the 1970s, which is not an easy thing to accomplish on a limited budget. The footage was grainy, the costumes were from the correct era, and they even managed to requisition some vintage 70s vehicles. Two drawbacks: The lines were dubbed, I’m assuming from French, and there was zero nudity. I was praying for a sex scene between Jesus and Mary, but unfortunately, while it may, in fact, be all good, all right, NOT quite everybody is getting laid tonight.

Oh, thank GOD this movie doesn't suck! It has all my favorite ingredients: Vampires, brawling, mexican lucha libre, and of course J.C. himself! And now it's on my Netflix list!

John, you should enjoy it. Just keep in mind, the movie was reviewed ON Moving Picture Trash. It's NOT The Greatest Story Ever Told....and it's certainly NOT as funny as The Last Temptation of Christ.

Also, good luck getting the theme song out of your head. God, please make it stop!!!

Oh believe me, I have no doubts about how bad it's going to be. That's the best part!

Brian, another killer review. People who make bad movies should hire you to do their ad campaign because you've certainly made me want to see more than a few of these clunkers.

If I can get over the fact that I'd end up in hell just for putting this on my Netflix queue, I'd be first in line to watch it.

This movie sounds fantasticly bad. I can't wait to see it.
-Dan-