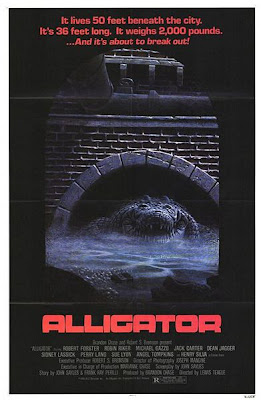 If you're a fan of Urban Legends than you should probably check this one out. Urban Legends is pretty much garbage. Alligator is not. You've heard the one about the baby alligator flushed down the toilet? The alligator then grows to epic proportions and feeds on those unlucky enough to venture down into the sewers. This movie takes on that particular legend but blends in some elements of its own about an experimental growth hormones used on dogs. The gator, named Ramon (named so by the little girl that originally purchased it from one of those touristy gator farms down south), feeds on their abandoned carcasses and grows really large. Also, I think the hormones give him the ability to teleport.

A humorous diversion, chock full of some grisly deaths and moderate scares. Speaking of grisly, why is it that the whole "vs" phenonmenon didn't take off more. I know, Godzilla did it to death, but those matches were basically just guys in costumes wrestling each other. We're starting to see these pictures come out today with films such as Alien vs. Predator, Freddy vs. Jason, Dollman vs. Demonic Toys, and Ecks vs. Sever to name a few. Personally, I think we should go back to the 1980s and before to film death matches between these pictures, particularly the ones about nature run amuck. For example, why not Prophecy vs. The Nest? I would certainly love to see The Swarm vs. The Kingdom of the Spiders. Why not The Stuff vs. Street Trash?? I guess the movie I most want to see though is Grizzly vs. Alligator (you probably didn't think i had a point when I said "speaking of grisly, did you?), not just because they both blatantly rip off Jaws. In the case of Grizzly, it was right there in the god damned tag line: "Jaws with claws". No, not just because of that. Not just because, like Jaws, neither beast gets a fair shake with their demise. Hell, Grizzly get's blown up by a fucking bazooka. How is that fair? No, the real reason I want to see this particular match is to see how the Grizzly approaches a battle with a 36 foot, 2000 lbs alligator. How does he avoid being taken in by Ramon's single best move, the death roll? Sure, the Grizzly has some enormous claws and teeth, but Ramon's got near impenetrable skin, a jagged whip like tale. Grizzly's best chance would be to gouge his eyes or cover them to put him to sleep, but, see, I'm not sure Grizzly would follow that strategy. Why? He's a fuckin Grizzly. So, to sum up, I give Ramon about a 90% chance to win this fight. Then again, what do I know? Ramon spent all the majority of Alligator eating dead dogs and children. Perhaps I give him too much credit.

This is a movie that's much better than it has to be, much like Frankenhooker or Kirdy Stevens' The Animal in Me. Credit for that can probably be given to the writer John Sayles (Piranha, 8 Men Out, The Return of the Secaucus 7, Lone Star). Sayles, I'm sure, added all of the humor including an allusion to Edward Norton (one of Ramon's victims, a sewer worker). No, not the actor, the honeymooner. I'm not going to give very much credit to the director, Lewis Teague. He followed this up with Cujo and Cat's Eye. I think he was last seen filming the Dukes of Hazzard reunion movie. He did an ok job.

Where Alligator really shines is the cast. Robert Forster (The Black Hole and Jackie Brown) plays David Madison, the cop who seems to have a difficult time holding onto partners. They tend to get shot or eaten. Robin Riker (Body Chemistry II) is his love interest Marissa but, in a twist, she's also the girl that purchased Ramon as a child. Robert Doyle (Barnaby Jones) plays Marissa's angry, vindictive father who flushes poor Ramon. He's only in this for a minute. Also, this was his last picture. My favorite character was Frank Pentangeli (The Godfather II) as Chief Clark. Whenever Madison screws up, Frank is there to fire him, but he always takes him back. Good old reliable Henry Silva (Chained Heat) even shows up as some sort of professional crocodile hunter. I guess they were confused because this was an alligator and so predictably, Silva gets eaten. He must have had some bad intel.

I mentioned earlier that this movie is funny. I know I'm not the trustworthy sort, so I'll just spell it out for you. A kid gets eaten at his own birthday party. Do I even need to elaborate? Ok, they are playing a rousing game of "walk the plank" as young kids are apt to do. The boy, dressed as a pirate, is pushed off the end of a diving board. He sees the alligator the instant before his friend, unaware of Ramon's presense, pushes him in. The water becomes red. Happy fucking birthday. Hysterical.

There's another great scene, set in the ghettos of St. Louis (Note: The film takes place in St. Louis) where some kids are playing stick ball in the streets and the alligator busts through the sidewalk. Since this occured directly after the suburban pool incident, I just assumed that the gator had taken on the ability to think himself across town. Of course, he's still working out the kinks of his new superpower, otherwise he wouldn't have gone through the sidewalk. That looked like it hurt. I loved when one of the stickballers ran to his apartment and grabbed a knife out of his room. I was anticipating a fight, but, unfortunately, the kid wised up and realized only a fool would bring a knife to a gator fight.

The alligator effects weren't really effects. I think it was a real gator. They must have used some trick photography to make it look big and for the most part they worked. Except for the scene were he goes through the sidewalk. That was terrible. The gator in that scene was also fake, and it showed. There's not much else to say. You will know if you will like this movie before you even see it. If you like it when people get eaten, especially rich, spoiled people (the wedding scene is priceless) than you will love this one.

Labels: 1980s, Brian review, Horror, I own it you can borrow it, nature run amuck

Clearly a very enjoyable film. I love seeing rich people get eaten! But it'll mean crying my eyes out first during the gator flushing scene. I already feel like Ramon deserves all the human flesh he can put away just for having to undergo that cruelty.

Everything comes back to toilets for you, doesn't it Beepy? Geez.

But Brian, as for your 'vs' - what about 'Lake Placid'? True, it's over in a second and nowhere near a fair fight, but the rampaging croc in that excellent, wonderful movie DOES chomp a grizzly bear, right? Or were you looking for something longer and more orchestrated?

Steve, you're absolutely correct. The 'Lake Placid' croc might even filter the pool with the 'Alligator' gator. I love that movie.