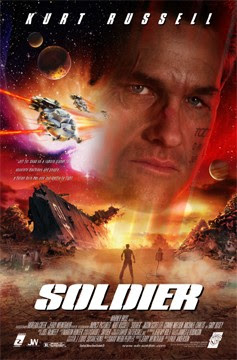 "I've seen things you people wouldn't believe. Attack ships on fire off the shoulder of Orion. I've watched C-beams glitter in the dark near the Tannhauser Gate. All those... moments will be lost in time... like... tears..in..rain".
-Roy Batty, Replicant, Nexus 6

Todd (Kurt Russell), like Roy, was at Orion. He fought in the battle of Tannhauser Gate. He TOO shed a tear, only it wasn't raining at the time. How is that possible, you ask? Soldier has been labeled a "side-quel" (by Blade Runner and Soldier scribe David Webb Peoples). While Blade Runner is an indisputable masterpiece, especially the new "Final Cut", Soldier is a decidedly minor film. Still, there's nothing wrong with a "minor" film, especially one that is competently made. Surprisingly, that's the case here. Who knew Paul W.S. Anderson (Resident Evil, AvP, Mortal Kombat) had it in him?

Chosen at birth in the year 1996 (Year one), Todd was trained as a soldier. A subsequent montage shows us his training through 2013 (Year seventeen) and then his combat career in such battles as The War of the Six Cities, the Moscow Incident, and the Battle of the Argentine Moons. Finally, in the year 2036 (Year forty), Todd becomes old and so the American government looks to younger alternatives. These replacements are a group of genetically altered supermen (read, Replicants. As far as I could tell, the main difference between the "replicants" of this film and Roy Batty's Nexus 6 version is a lack of empathy in the Soldier versions) commanded by the snivelling, West-point trained Colonel Mekum (Jason Isaacs). Todd and his fellow soldiers are rendered obsolete. This point is driven home when the pride of Mekum's supersoldier project, Cane 607 (Jason Scott Lee), annhilates Todd and a couple of his buddies in a "friendly" competition. Todd, left for dead, is literally taken out with the trash. By this, I mean he is dumped on a landfill planet somewhere in the outer rims (along with other refuse).

On this garbage planet, Todd encounters a colony of stranded humans (Sean Pertwee, the luscious Connie Nielsen, and Michael Chiklis who unfortunately did not don "The Thing" makeup for this role), who crash landed here years earlier. It baffles the mind, however, that they have not been discovered since space garbage trucks seem to make weekly visits. Still, minor detail. Todd has trouble fitting in initially, because, let's face it, all he knows is war and killing. He knows little about setting the table, washing dishes, or babysitting. Things that are important to any successfully peaceful society. So, he decides to teach a young kid, Nathan, how to protect himself against a viper indigenous to the planet instead of his basic chores. Later, he experiences a flashback and nearly kills The Thing. The colonists have had enough and, so, it's time for banishment. Todd doesn't take it very lightly and he actually sheds a tear, something he's never done before. Ok, I could go on and on about the plot. Basically, Colonists take Todd back. New supersoldiers (led by Cane 406) conduct training exercise on Garbage planet. Training exercise becomes actual combat (as Colonists are deemed hostile). One side wins.

I liked this picture a lot more than I did the first time I saw it. If you're looking for a movie where Kurt Russell's character has 104 words (Not lines, words) of dialogue, than this is the one for you. It's a great way to see Michael Chiklis playing the anti Detective Mackey. He's a pussy here, but a good hearted pussy. The special effects are top notch, for the most part. If you look closely, you'll even notice a spinner from Blade Runner on the garbage planet. Oh, and Gary Busey shows up, in a good guy role, as a commanding officer who fights to keep Todd and his fellow soldiers from going out of print. Did I mention Connie Nielsen (Gladiator) is hot? Apparently, they were supposed to have filmed the Battle of Tannhauser Gate, but I guess it wasn't in the 75 million dollar budget. I hope for Kurt Russell's sake that they didn't pay him per word. There's a great fight at the end between Todd and Cane 406 that reminded me of the Rocky and Apollo Creed fight at the end of Rocky I. If Rocky had been able to use props in that one, say a helicopter propeller blade, he would have fought someone else at the end of Rocky II. See, that's why Todd is superior to Cane. Cane may be faster, stronger, maybe even technically smarter. If he's anything like the Nexus 6, he's at least as smart as his maker (I'm not sure if that would be Tyrell. I'll just assume it though). Unlike the Nexus 6, however, he lacks the human quality of emotion and heart. Roy Batty and Todd fight to sustain their life. They have heart and they know love. Cane fights because he's supposed to.

Ok, it's not a great picture. It's a solid one. I'm not a Paul W.S. Anderson apologist, by any means. I dug Event Horizon, tolerated Resident Evil, and while I thought AvP was ok, it could have been SO much better. This might be his best film. It's certainly his most underrated if it's possible for an Anderson film to be underrated. If you can get beyond the ridiculous coincidence that Cane and his troops, out of all the worlds in the galaxy, would choose this particular dump to conduct training exercises, then you might enjoy it too. The last image is one of hope as Todd embraces his newfound ability to love and, for the first time in his life, look toward the future.

Note: I'm not giving away whether or not Todd lives with that last line. It could be someone else's future, right?

Michael Chiklis? I'm there! Should hold me over until Shield 5.5 wraps up.