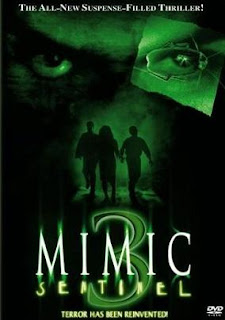 Quite possibly, this is the second best Rear Window knock off I've seen behind only the splendid Abominable. The nightmare from the first film, and I suppose Mimic 2 (although, I still haven't seen that one), is long over. Do you remember Mimic? Guillermo Del Toro's first attempt at a big budget hollywood picture? Of course you do. In many circles (I don't frequent these circles) it's considered a disaster. Of course, I know better. It's a masterpiece. Well, a lower tiered masterpiece but a masterpiece, nonetheless. The original story concerns a plague that is afflicting and killing children throughout New York City. This plague, called Strickler's syndrome is spread by cockroaches. To combat the epidemic, an entomologist (the lovely, what the hell happened to her, must have gotten fat Mira Sorvino) creates a new breed of roach. The Judas breed. This roach succeeds in killing the offending cockroaches and, since they were designed to be sterile, subsequently die out. Or so they thought. Of course, the fucking things adapted and grew to be the size of humans. Not only were they as big as humans, but they could also look like humans. Act like humans. Mimic humans! Except for the talking. They never really got that part right. Damn that clicking sound. Anyway, we won that battle. Or so we thought.

Like I said, I missed Mimic 2 but I don't think that impeded my enjoyment any. This seems like a stand alone picture. It's no masterpiece, but in the world of direct to video sequels it's pretty good. It's also just short of 80 minutes so if you disagree with me and think it's terrible at least you didn't waste too much time. Karl Geary (Sex and the City for all you ladies) stars as Marvin Montrose aka The Bubble Boy. He's one of the few to actually recover from Strickler's disease. It was in all the papers (at least the ones plastered to his bedroom wall). Unfortunately, he lives in a bubble. Hypersensitivity to perfume and cigarettes and exhaust fumes will do that to you especially when you're still living in New York. What the fuck Amanda Plummer (she plays his mother!)? Couldn't you pack the family up and move out to the country? Too busy fucking cops I guess. Marvin basically has one hobby: Voyeurism.

Speaking of voyeurism, I was walking through the Common with a few friends saturday morning when we spotted Anne Hathaway walking her beautiful chocolate lab. So, of course, we decided to follow her for a bit (there were girls with us, so it's not that creepy). Hathaway seems like a good person because, at one point, she picked up her dog's mess. I desperately wished I had snapped a photo and sold it to Star magazine. It would have been better if her assistant had been with her and forced to pick it up. That would have been scandalous, and therefore, worth more. Anyway, we had the high ground but some of my friends insisted we cross over. Never give up the high ground. Stupid. We lost her soon after. You're probably wondering what this has to do with Mimic 3?

Anyway, Marvin is constantly taking pictures of his neighbors that live in the apartment across the alley. Or, he's just staring at them through his telephoto-lens. Characters like "the garbageman" (because of his hat I guess and that he's always taking out the garbage) and "the birdman" (because he owns birds) and Carmen (because she's pretty hot and also had a nice role in his favorite show "Lost"). This is the second Carmen I've seen in a "bug picture". The rankings are as follows (based on hotness, acting ability, and attainability):

It was a pretty close race, but since Denise Richard's is seemingly losing her mind at this time, she's probably a little more attainable.

On one particularly drizzly night (It's always overcast in Bulgaria, I mean New York) Marvin sees a little boy in the alley. He also sees a strange cloaked figure standing off in the corner. After some strange clicking sounds, the boy vanishes. I guess Marvin is too young to remember the first movie. After flyers are posted in the alley for the missing kid, Marvin assumes one of the tenants across the way abducted him. The garbageman seems a likely suspect. So, with the help of his sister Rosy (Alexis Dziena) and her new best friend Carmen (the beautiful Rebecca Mader of "Lost") they begin an investigation into his disappearence. They'd ask the police for help, but the one cop in town (John Kapelos, Barry "the sniffling accountant" from "Seinfeld") is too busy banging Ms. Montrose (Plummer).

This is a small picture which, I guess, fits with the miniscule budget. It's clear they had only a couple of days to shoot this thing because several plot strands are left hanging. There's a terrific scene where Carmen and Rosy break into the garbageman's apartment to look for clues while Marvin keeps an eye on them through his rear bedroom window. It's kinda like that scene in Rear Window or, I should say exactly like that scene. Unfortunately, I'm guessing the majority of the audience for this picture haven't seen Rear Window, so fuck it. This is an original. At this point, I'll just mention that the Judas Breed are no longer extinct. They've slowly been colonizing the other apartment building. So, that guy that's just been standing still for an hour in birdman's apartment isn't really birdman. He's actually a giant cockroach, if you can believe that. That little boy in the alley? He wasn't actually a cockroach, but he was killed by one. That lady with the groceries? Rosy's drug dealer? The cop banging Amanda Plummer? Well, they were all human too actually. Still, they got cockroached.

This movie is solid. I liked that there were only two sets and am hoping they reinvent this one as a broadway play. There's some solid night time back alley atmosphere. The director, J.T. Petty (The Burrowers) and his crew actually did a solid job shooting this thing too. I made the mistake of watching the "making of", however, because Petty came across as a bit of an asshole when he said "I'll be honest. This was just a pay check for me." It's possible he was joking. The instant Lance Henriksen walks into the picture (he was the garbageman all along! not a cockroach) this thing became a whole hell of a lot better. He's not even a garbageman. He's the assistant director of the CDC, but only if that guy were more evil. He has what amounts to maybe seven minutes of screentime, but manages to class the joint up especially when giving lines like "this is not a city, it's a god damned killing jar." According to imdb, Henriksen has appeared in 141 films and, I'm sure, all of them are worth watching for his presence alone. Strangely enough, he was in the other Rear Window "remake" Abominable (for perhaps five fantastic minutes). I'm still not sure why he's not in more blockbusters. He could have been the John Turturro character in Transformers for a tenth of the price. Fucking Michael Bay.

Unfortunately, they rushed through the ending. We never actually have any resolution to Rosy's plotline. Last we see her, she's locked in Henriksen's trunk as the cockroaches are trying to get in. I'll just assume she died. I'm all for realism, but come on. Use some fucking light when shooting the interior of a trunk, for chrissakes. Plummer receives the same fate as Dizzy from Starship Troopers, except that she didn't get to "have" Casper Van Diem, instead she got the "sniffling accountant" from "Seinfeld". I liked when Henriksen uses the hypersensitive Marvin as his "coalminer's canary" (he's allergic to giant cockroaches). No nudity. I think if Marvin and Carmen were to engage in the carnal act, it would probably kill him. I think half of the budget went into the explosion at the end. A quarter of it went to Henriksen. The bugs look effective from a distance (and in shadow), but when shown up close, and actually in motion, the terrible CG is most evident. There's some moderate gore cut way too quickly, except when one unfortunate character gets a pincher punched through his face. Again, it's not even 80 minutes long! When Sex and the City hits theatres next month, my recommendation is to stay home and watch this. The only way a guy should be caught dead seeing that in the theatres is if he has the assurance (best, get a written contract beforehand) of getting laid afterwards. If you don't have a copy of Mimic 3 handy (or it's not on tv) just stare at the blank screen for a while and use your fucking imagination.
Posted by brian at 5:10 PM

Another brilliant review! Thanks for making me laugh - again.

yes, damn funny and readable, as always! Although, in fairness, I should point out what I've pointed out to roughly 4000 tourists in my 28 years: it's Boston Common, not Boston Commons.

That was not be being pedantic about Boston Common--probably came from some guy who used to live in Jamaica Plains.

Fantastic review. Why does there seem to be a wolf in the cover picture? Coyote?

There Sam, I mean Steve. I fixed it. Happy?

I think there was probably a scene where a roach was supposed to mimic a wolf that escaped from the Bronx Zoo. Unfortunately, they ran over budget and couldn't include it.

Jamaica Plains own Arboretum now has signs pointing out the rampamt coyote population: what a killing jar that place has become!

...please where can I buy a unicorn?