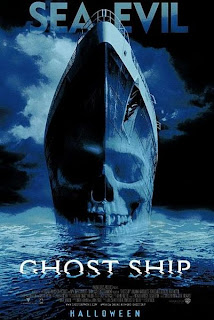 I'm not quite sure George Clooney knows what he's talking about. A few years back he gave an Oscar speech where he applauded motion pictures for being near the front of the civil rights movement. You know, for giving Hattie McDaniel an Oscar something like 100 years ago. It only took them another century or so to award another black actor with such a distinction. Anyway, it would seem that Clooney has never seen a horror film. I love a good horror picture, but I'll be the first to admit it hasn't been the kindest genre to the black actor. I thought about that whlie I was watching Ghost Ship, in which Isiaah Washington (token black guy) plays the first mate of a tug boat called the Arctic Warriors. If this thing were to hold true to form, he'd be the first one killed as soon as he got off a few funny lines. I admit it. I was wrong. Washington is the second guy killed (after the funny hispanic guy) and he's more of the stereotypical angry black man. Also, he cheats on his fiance with a hot naked ghost, but justifies it because the ghost is dead. Baby steps people, baby steps.

Julianna Marguilies and Ron Eldard, two of Clooney's ER costars, appear as part of a salvage crew out in the Bering Strait trying to recover a luxury cruise ship lost at sea forty years ago. Their tug is captained by a mumbling, nearly comatose, possibly embarrassed to be here, Gabriel Byrne. Karl Urban (Pathfinder) plays a guy that gets caught in some gears...and is also kinda funny for the first time in his career. Desmond Harrington is the mysterious stranger...and there's also a little dead girl, played by Emily Browning. It's a salvage mission in the frigid Bering Sea! It's my second consecutive review of a "ghost ship" picture!! It's a piece of shit!!!

I'm at the point in my life where I refuse to pay more than $4 for a horror picture (i.e., I'm broke). I picked this one up today from Newbury Comics for $3.99 (less 20%). In my other hand, was the underrated Jurassic Park III. Also $3.99. Still, I couldn't justify buying both, at least not this day. I figured Ghost Ship would make a great follow up review to the splendid Deep Rising. Also, when in doubt, always go with the hologram cover. I marched up to the counter, out came my debit card, and history was made. Unfortunately, I still had to watch it.

Here's what depressed the shit out of me. This picture gets off to a marvelous start. Pre-title, 40 years in the past. There's a great classic score, a beautiful Italian chanteuse in a red dress, revellers dancing the night away on the deck of the Antonia Graza. A little girl (Emily Browning) shares a dance with the captain. What follows just might be the greatest mass murder in film history that involves a taut wire propelled across the dance floor...say...at about midriff level. I was so amazed, that I actually had to watch it again....and again. I'm a sick fuck.

I remember this debate I had in college. I may have been drunk at the time. My friend claimed that everytime someone ripped a fart, microscopic shit particles would fling themselves into the air and cling to everything within about ten feet or so. I called bullshit. Well, I'm starting to believe. The rest of this movie is one of those shit particles farted out by this opening brilliant scene. That's a pretty awful segue, but I'm going to stick with it. The pacing in this thing is all wrong. I mean, the salvage boat arrives at the derelict cruise ship within the first fifteen minutes (so, after the opening scene, we had an introduction scene, a scene in a bar where a mysterious stranger shows up with a proposition, and then they actually had to find the thing....all in fifteen minutes), but then it takes about another 30-40 minutes before anything really happens. Finally, the hispanic guy gets blown up on the tug and the rest of the crew is stranded on the boat with anywhere between 100 to 200 million dollars in stolen gold. People wander off on their own repeatedly. Strange things happen. They see dead people, etc, etc. C'mon, get on with it man.

Another thing, this thing supposedly takes place in the Bering Sea, off the coast of Alaska, which, in checking my map, is pretty damned far north. How come the water is always calm? C'mon fuckfaces, I've seen "Deadliest Catch", I know those waters ain't fucking ever calm. And it's ice fucking cold too. And how does the final survivor spend days floating on a chest, Joe Vs The Volcano style, half submerged in these icy waters until he/she is picked up by another boat? I'm calling bullshit on this as well. This thing looked like it was filmed in the carribbean. Except that Karl Urban had a beard and wore flannel. Maybe I'm wrong. I've never summered in the Bering Strait. Apologies.

Finally, the little ghost girl shows up to talk to Julianna and we see, via a great flashback, what happened to the passengers. Unfortunately, I sat through over an hour of this crap to learn something I already knew. The "twist" in this thing is horrendous, involving a soul collector who needs to reach his quota in order to satisfy "upper management" (God?). He does this to the tune of some pretty lousy, completely out of place, heavy metal. Who is the soul collector? Well, I don't know, but I don't like the way that "mysterious stranger" is looking at me. Then the crew dies, save one, and the ship blows up. Come to think of it, the two minorities in this one should consider themselves lucky they got killed first. I still can't get this shit off me. The end.
Posted by brian at 9:36 PM

Labels: 2000s, Brian review, ghost, Horror, I own it you can borrow it

You told Fatiha that Batman was sold out in the city? Is that true? I saw tickets on sale for the early shows at the Common...

I told her it was selling out fast, but that I assumed they'd open up more shows or something. This is what I heard 2nd hand, however. Still, I'd recommend getting tickets early.

Will do. And did you know that the Newbury Comics at State is closing? They sent me early coupons for a sale that starts Monday.

Yeah, but they're relocating to a larger location in Faneuil hall. Still, I love the govt ctr store and will miss it.

As bad as this movie sucked, I bet you'll rent the sequel.

There's no fucking sequel and it's been 6 years! I'll just have to write it. It will have a fantastic opening scene where a group of people are cubed simultaneously. The last 90 minutes will just be Julianna Marguilies standing around naked. I won't even write a boat into the script. Genius.

Write a prequel about everyone waiting for the boat.

Hee--the first paragraph is brilliant.
Margolies and Eldard played lovers on 'er' I think. You'd think they'd at least have some chemistry together.

Karl Urban may not dabble in jocularity in his films...but he always kicks ass...whether he's playing Caesar, Cupid, Eomer or even John Grimm...he always rocks my boat (I couldn't resist the cheesy metaphor!).

I agree...that wire/murder sequence in the beginning is classic...I'm still haunted by it years later!!

Wow, Meg! I'm impressed that you've seen it. Yeah, it's a classic scene. One of 'Dark Castle's' best.