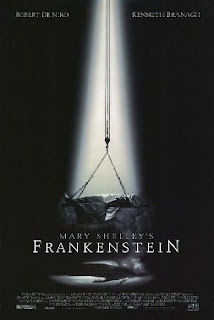 Here's yet another film where all the critics, or at least 61% of them (it scored an absurd 39% on the tomatometer), were wrong. I'm not going to call it a great film, but it's certainly a very good one and features, perhaps, the greatest Robert Deniro performance of the last twenty years. His monster proves to be the most human character of the film.

If you know how to read then you should be familiar with the story. If not (you can read, but you haven't read this), then what the fuck are you waiting for? It's a great fucking novel man. Get on with it! Victor Frankenstein (Brannagh) is not really a man of hard science. As a relatively young man he travels to Ingolstadt to study medecine, but ends up accosting his professors for not teaching the works of long dead kooks, who practiced "witchcraft" and "alchemy". The school tries to teach him to preserve life, but he only wants to create it (apparently not in the biblical sense since his fiance is adopted sister Elizabeth, the sublime Helena Bonham Carter, and as far as I could tell they never once had "relations", i.e. a solid round of boning). Frankenstein falls in with a bit of a kook, an underused John Cleese, who teaches him about the reanimation of dead tissue. Then, the city is attacked by a plague and Cleese is murdered while trying to administer a vaccine. His murderer is hung, Frankenstein procures the body and the rest is, as they say, history.

I loved the reanimation method which involved a tank of amnionic fluid (Frankenstein waiting outside a birthing house while a nurse provides him with a bucket of the stuff in exchange for a few bucks is a classic moment), lightning, and I think some electric eels...or maybe they just stood in for the lightning. Shelly never really delved into the science behind Frankenstein's work, so this has always been open to interpretation. This method seems a bit more scientific than the other film version...or the method used in Jason Lives: Friday the 13th Part VI. This picture is actually a bit too insane at times, a little too kinetic. Brannagh, who doubled as the director, apparently never met a shot he didn't like. If this thing had been edited a little tighter we could be discussing a masterpiece. The Set design is splendid, from the urban plague ridden nightmare of Ingolstadt to the serene aristocratic beauty of Geneva and finally to the frigid arctic, scenes that bookend the film. The scenes in the arctic have a strange beauty and appear shot on a stage which, in a strange old-timey way, enhances the atmosphere. It's no wonder that this is a companion piece of sorts to Bram Stoker's Dracula, another beautifuly shot yet batshit crazy picture, since both are produced by Francis Ford Coppola.

The acting in this picture is, almost across the board, outstanding. I'll just come out and say it though. As an actor, I can't stand Kenneth Brannagh. Luckily, he is ok here, but I can't help but think that if they had cast someone with a bit more range and a bit more legitimately intense (as opposed to simply playing intense which Brannagh does throughout) this picture would be the definitive adaptation. Hell, here's an idea. Reverse the roles played by Aidan Quinn and Brannagh. Quinn plays Captain Robert Walton, an arctic explorer obsessed with the northwest passage. His obsession is clearly used to parallel Frankenstein's. Brannagh I'm sure had his plate full directing the thing, so why not take the smaller, but still pivotal part. Also, Quinn's a better actor all around, so it's a win fucking win. Oh well, they'd never listen to me. Bonham Carter is terrific as Elizabeth, Frankenstein's bride to be and also his sister!!!! She gives her heart to Victor, but his creation, ahem, takes it for himself (great fucking moment).

It's Deniro, however, who ultimately makes this a picture worth watching. This is an oscar quality performance and the best yet portrayal of Frankenstein's abomination. Deniro brings layers to the "monster" never seen before. At one point, he tells Victor "I am full of love and rage. If I don't satisfy one, the other will consume me" or something close to that effect. The film's best scenes occur when Deniro (I don't really feel comfortable calling him a monster and since Frankenstein never gave him a name, we'll just go with Deniro) stumbles upon a farm house towards the start of winter. A poor family lives there, close to starving, unable to harvest their frozen fields. Deniro hides in the pig sty and, while they sleep, picks their crops and chops some firewood. He then watches and learns from them through the cracks in their cabin. Deniro doesn't blindly stumble upon the family like the original movie version would have. He is aware of his appearence, ashamed of his face. Deniro briefly befriends the blind old patriarch, touchingly refers to himself as "ugly", before being beaten away by the son. It's this moment when Deniro decides to seek vengeance for the creation of such a life, vengeance upon his father. Then later, he decides a fuck buddy will suffice ("if I can't have a wedding night, I'll be with you on yours").

That's about it. I personally love this picture and, once again, found a mini-masterpiece in a bargain bin for a mere $3.99. It's certainly not scary, but if you're looking for something with great atmosphere, a tragic anti-hero, a prissy mis-cast overacting Kenneth Brannagh, and a few scenes of shocking over the top gore, then look no further. If, on the other hand, you're looking for nudity, I suggest you rent Bram Stroker's Dracula and jerk off to the Monica Belluci scenes (or the Sadie Frost bangs a beast scene, if you're into that sort of thing). I know I will.
Posted by brian at 10:26 PM

Labels: 1990s, Brian review, I own it you can borrow it, monster

I'll have to give this one another try. Something about the acting or the lines themselves in the first five minutes made me lose interest. But, I understand a lot of crazies dismiss Dracula as well.

I think I'll just reread the book. I couldn't get past the birth scene in this movie. Couldn't he just be strapped to a table and electrocuted like every other monster?

As for nudity, Brian, why do you keep not watching "Bram Stoker's Burial of the Rats"? That one's full of NAKED LESBIANS for heaven's sake. What more do you require from a movie?

I have to agree with you...this is an underrated movie. Helena Bonham Carter is fantastic in this (the only movie I liked her more in was 'Fight Club') and DeNiro was great. But I actually prefer Clancy Brown's portrayal of Frankenstein's creation in 'The Bride' (David Rappaport is also great as Rinaldo the Midget).

ewww....Sting! I saw that when I was a kid and pretty much hated it. Perhaps I'd appreciate it more if I saw it now. Is there a director's cut where they edited all of the Sting scenes out?

I do love Jennifer Beals. Naked?