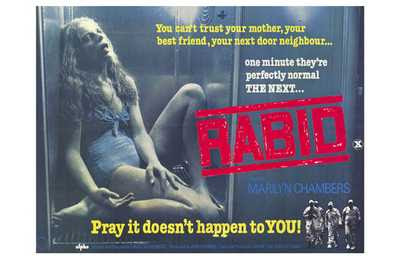 It strikes me as strange that more horror films haven't been shot in the wilds of Canada. What a fucking blight on our world, huh? Snowy, barren, and almost completely unoccupied. It might as well be the fucking arctic circle and we're only talking about a locale not that far from Montreal. And, what's with the road names? Concession road 11. Concession road 12. Concession road 13. What does that even fucking mean? Pretty fucking easy, if you ask me, to get slaughterered, tied up, bound, gagged, and so on. I'm telling you, Canada is a goldmine for horror.

Anywhoo, Cronenberg has always been more interested in the horrors that come from within than anything supernatural, otherworldy, or involving a deformed family of backwoods Canadian yokels raping and maiming their way through lost city folk. His nightmares are a world where medicine, disease, sex, etc strike out at their creators. Rabid is his first major feature after Shivers (I still haven't seen it, I suck). Chambers plays Rose, a young woman who, after a horrific motorcycle accident, undergoes a radical skin grafting procedure. Thank god the Keloid clinic, a purveyor of such radical surgeries, was located within eyesight of the crash. Dr. Keloid performs the procedure (um, shouldn't they wait until she's stable before performing cosmetic surgery?) and everything seems normal. Except that Rose wakes up weeks later with a vagina (could be an anus, actually) under her armpit and an insatiable need to thirst. On blood. Man blood!

Here's why I really like the casting of Chambers (Private Fantasies 4). She's comfortable in her own skin (and out of her clothes). She wouldn't think twice about walking around topless whether it serves the scene or not. Guess what else? She proves herself very capable as an actual actress. Somehow, she's able to maintain an innocence throughout the film despite what we know to be a fairly sordid film history. She may be the spreader of the foulest disease our neighbors to the north have ever encountered, but you wouldn't know it from spending time with her. Until, that is, she seduces you and sticks that penis-syringe into your own neck. In one scene, she was seducing a cow until the drunken farmer came stumbling in and attempted to rape her. He got fucked instead. These scenes were great, especialy the aftermath as Chambers gently carresses the stunned, near comatose victims.

The movie is, perhaps, anti-cosmetic surgery but there are no real villains here. Keloid was genuine in his desire to help Rose. Keloids business partner, and co-financier Murray, is a genuinely good guy who spends the majority of the film driving Rose's boyfriend around in an attempt to track her down. As the epidemic spreads, he decides he just wants to get home to his family. When was the last time you saw a good hearted executive in a horror picture? He's played by Joe Silver (Shivers) and brings the film some much needed humor. Not quite as much as the guy wearing the "jogging kills" tee shirt. That guy cracked me up. Rose's boyfriend, named Hart, is probably the least interesting character in the film. Unfortunately, he's there for long stretches so, at times, its a bit of a slog to get through.

Here's the nature of the disease. Rose injects a guy with her penis-thing. Guy passes out. When he wakes up he mindlessly starts biting people. Those bitten become infected. So, I guess my favorite scene is the one where Keloid, recently infected by Rose, tries to perform surgery. If I'm the nurse, I'm not quite sure I want to hand him those scissors. Also, I liked where they found the girl Rose was "making out with" in the hot tub (see poster art). It's the most haunting image of the picture that I didn't remember the first time I saw it (too drunk). So, here. I've saved you 90 minutes and given you the image for free. Enjoy.

What else can I say? Do you like it when porn stars appear in "regular" films? Do you like assholes in armpits? How about penises that poke out of said asshole and spread a form of fast moving rabies? I do, so I watched it and dug it. I'd even go so far as to say that this movie had more of an influence on recent fare such as 28 Days Later then Night of the Living Dead did. Martial law is declared in Montreal and the military doesn't seem to discriminate between infected and non-infected too much. There is a nice moment where a rabid guy attacks Hart's car and is promptly shot by a sniper. The military swoop in, sanitize the car, and wave Hart through. Business as usual.

Keep in mind, the ending is a downer and the action moves a bit slow at times. It takes a while before the shit hits the fan although there is a pretty spectacular car crash for a budget this size about 30 minutes in to tide you over. This is a "foaming at the mouth" picture that may have come after I drink Your Blood, but is certainly superior in every way. The camera moves around enough to keep us involved and creates a bit of tension in a couple scenes. The score helps as well.

I found the first few attacks in the hospital rather creepy and thus made the movie all that much more enjoyable. This film will forever remain in my collection.

I'd love to see your collection. Loved this movie.

Okay, here's what I don't get (I'm concerned that this is what I don't understand about this movie). You say that the doctor was not evil and was trying to help Rose. How is putting a vagina/penis/needle thing in her armpit "helping" her? Did she have one already that was damaged in the car accident and his assistant Igor stole one from the vagina/penis/needle bank that was labeled "ABNormal"?

Think of the "vagina/needle/penis thing" as a cancer that grew as a result of the surgery. Sort of like a side effect. It wasn't the intent, just the unfortunate outcome.