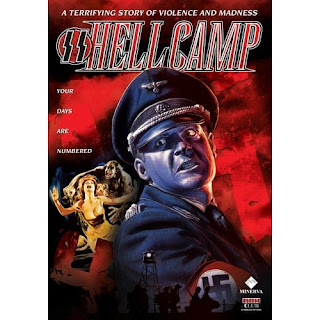 Should I really let anyone know that I watched this thing? Famous (infamous?) for being labeled a "video nasty" and subsequently banned in the UK, SS Hell Camp is the touching story of a mongoloid (the picture is racist too!) creature (man with lots of hair glued on) held prisoner by a Nazi she-bitch, fed an overabundance of aphrodisiacs, and forced, against his will mind you, to have sex with lots and lots of virgins. Will the poor brute ever know its freedom? Is there any atrocity those Nazi sons (daughters) of bitches won't commit?

I'm just kidding folks. There's nothing touching about this picture. If you're the kind of person that would "touch" yourself during it, I don't want to hear about it. This one is offensive in every way imaginable. Having no idea what to expect going into this thing, I developed an idea as soon as a Nazi grunt grabbed a crying baby from its screaming mother, flung it into the air, and used it for target practice (nazi skeet shooting). Brilliantly (despicably?), this occurred a mere fifteen minutes into the film. With no taboo off limits, I proceeded to the edge of my seat.

I guess there's this whole genre out there called "rape". You may be familiar with it. I'm not gonna lie here, but I've seen a few in my day. Still, I refuse to give rape it's own label as I'm not really fond of the particular genre. Perhaps you've seen a little film called I Spit On Your Grave, perhaps not. That features a gang rape by some New England yokels. The film itself is terrible, but I begrudgingly acknowledge that the rape scene (all 20+ minutes of it!) was extremely effective (i.e. repulsive). For the majority of the film, the actors were awful, simultaneously hammy and stilted. Somehow, they turned it on for the rape though. I'm not sure if they should be commended for it. Of course, typical of most rape films, this one ends in some sweet revenge as the victim uses her sexuality as a weapon (remember the bathtub castration?). I've also seen Irreversible which has the distinction of being the only Monica Belluci film that managed to repulse me despite her being nude. Since the events are told in reverse, with one of the most brutally realistic revenge scenes ever filmed happening in the first five minutes, the rape scene is all the more difficult to handle (and like the scene in I Spit...this one seemingly has no end). It's a brilliant film, yet one I will never sit through again. I guess the toughest scene to sit through was in the 1984 classic Revenge of the Nerds when Louis posed as Stan and raped Betty in the Carnival Fun House. Fucking nerds.

See, not really a fan of rape. There's a huge difference between the films I just referred to and SS Hell Camp, however. Hell Camp presents some of the most unrealistic non-consenting sex scenes I've ever seen (clearly no coitus). It's hard to take seriously even though the content is so disturbing. Really though, rape is not cool whether realistically portrayed or not, especially when it's sole purpase is to titillate the viewer (I fear that was the filmmakers intent). Rape is not cool kids and I almost think it's an act even lower than baby killing. Unfortunately, the premise of this picture kind of involves the subject so let the slogging begin. Hitler condoned it, embraced it, Loved it and look how he turned out. It's late in the year of 1943 and Hitler is getting nervous. His troops are encountering extreme resistance. The allies are advancing, spies are everywhere. Desperate times call for desperate measures. Hitler recruits his leading scientist, Dr. Ellen Kratsch, to run experiments on a mongoloid prisoner, taken from a mongoloid ghetto, probably somewhere in or around Mongolia. Basically, Hitler wants the guy to be really horny so he can rape as many virgins as possible. That'll show those fucking allies! Yeah, that's the plot. Are you still here?

Look, it's not all rape. There's also some good old fashioned torture. One guy gets his balls cut off (off screen). There's a torture device involving a bucket, rats, and fire that seems pretty unpleasant. Water torture, etc. A subplot involves some resistance fighters plotting the rescue of their women (virgins) before the monogloid (referred to in the credits as "the beast") rapes them to death. They get captured (offscreen) and tortured in some pretty horrific ways, but not nearly as horrific as what some of the women get. Yeah, this picture might be a misogynistic one. Sorry ladies. That's just the way the Nazis were. This picture is a truth vehicle, telling it like it was and soon may be again if we don't learn us some lessons. This Nazi scientist (she's hot and evil) was the biggest chauvinist of them all. When she wasn't berating a soldier for getting aroused while viewing a rape ("a soldier's supposed to be stoic!"), she was fondling the breasts of a virgin prisoner. If you can't guess what happens to this nazi she-devil in the end, you shouldn't be anywhere near a "video nasty". You're too innocent.

There's a lengthy battle at the end that's about 1 part actual footage shot for this movie and 99 parts stock footage. The differences in film are jarring. For some absurd reason, they decided to shoot the aerial scenes of a bomber themselves, and used a model airplane attached to string (slow it down and see for yourself). The best part of the picture was the panning shot of a Nazi vehicle entering base as a swastika statue looms in the foreground. What's that shadow, clear as day, on the swastika? Oh, it's just the camera crew. Pause it and you can make them out perfectly. Brilliant moment. Check out the Hitler stache on the director.

Lots of bush, lots of boobs, hell, lots of dick even. Not one titillating moment though. Several boring scenes that almost had me begging for the obscene stuff, then I sobered up. Stupid Nazis. Now, they're ruining my skin flicks.
Posted by brian at 5:30 PM

Wow, no positive or negative reaction to a "rape" film involving nazis? I am shocked. Maybe the next one will bring more of a response.

Brian, are you sure these movies aren't getting under your skin a bit. Yesterday, I was getting a wicked nazi-rapist vibe off you and I wasn't the only one who commented on it.

If you weren't so funny, I'd be really worried about your mental health.