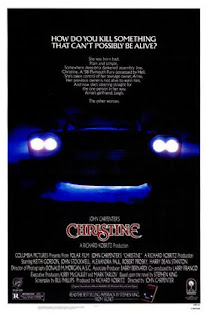 I've never been a car person. I've owned one in my life (a honda civic) that I pretty much drove until it was no longer fit for travel (took me about two years). Something about the rocker panel. Wasn't even sure what that was but whatever. Since I live in a city now it's easy to get by without one. Still, I guess I understand the fascination. My dad is a mustang guy, watches Nascar religuously and always seems to root for the FORDs. There were always kids in high school with their heads constantly looking under the hoods of their cars. I don't know, always thought that was a waste of time. Don't get me wrong, I can appreciate a nice looking car but to show me the engine and act like I should be impressed by your eight cylinders (or whatever), well I just don't get that. I can check the oil, that's about it. The rest might as well be brain surgery. Maybe I've just never had the right car.

Christine is a picture about a car that seems right and the kid that loves her. More than anything (even girls). The twist is that the car loves him back. Arnie Cunningham (Keith Gordon) starts out in this thing as your typical high school nerd; socially awkward, poorly dressed, oversized glasses, terrible with girls, constantly bullied, etc. Strangely enough, his best friend is one of the more popular kids in school, Dennis (John Stockwell); handsome, athletic, most likely not a virgin (if we are to believe him anyway). I loved the relationship between the two at the beginning. Dennis refers to a sophomore girl as a "sperm bank". Arnie counters that he doesn't think he's got enough to "make a minimum deposit". Dennis delivers the picture's best line when he says "what are you talking about, you're carrying your whole life savings between your legs." After the first day back at school, Dennis is driving Arnie home when Arnie spots something off the side of the road, an old beat up red Plymouth Fury. He's instantly smitten and purchases it on the spot. His justification? "For the first time in my life I've spotted something that's uglier than me.....and I can fix her."

Christine is not your ordinary car, however. In the opening (Detroit 1957, twenty years before the events of the picture) we witness her birth in an auto factory. She takes off a workers hand with her hood and, somehow, manages to asphixiate another worker that would have the audacity to smoke inside of her. She's evil from the start. No explanation. No possession by a demon or some deranged serial killer who met his demise at the exact same time she was conceived (at least, not that we know of). She just is. I'll be the first to admit that this is a silly fucking idea for a movie, but somehow it works. It's so professionally made and the actors take their parts so seriously that the premise never devolves into unintentional hilarity. Based on a Stephen King novel, one of his few early novels that I just couldn't bring myself to read, and as directed by John Carpenter (The Thing, Halloween), Christine is quite simply a deranged story about love and revenge. Unfortunately, it's a bit too light on the gore (as in, there isn't any) and there's a complete lack of nudity. Interestingly enough, they were forced to go back and add a lot of "fucks" and "cunts" into the script to ensure a hard R (without them, this might have been a PG). Imagine that, the producers actually desired an R rating! "no ones going to pay to see a PG rated horror movie", they said. Yet another reason that PG-13 was the worst thing to ever happen to moving pictures.

Keith Gordon (future director of the great WWII film, A Midnight Clear) is terrific as Arnie "Cunt-ingham" (label courtesy of resident Bully, named Buddy). His character undergoes an incredible transformation from shy, nerdy Arnie to arrogant, asshole-like, contact wearing Arnie. Hell, he even gets the girl that Dennis had eyes for. He was the kind of kid that would sit at home playing scrabble with his parents and complain the next day because his mom wouldn't let him use "fellatio" to achieve a triple word score. Of course, now he's taking girls out to the drive-in and having them grab his junk (unfortunately, it's through the pants). As Arnie is transformed, so is the car. Into a thing of beauty (I guess). It's a little odd though that Arnie always calls her by her name and acts like he'd rather be with her than Leigh (his girl). He doesn't like when anyone else lays a hand (as in smacks or fondles I guess) his car or talks shit about her. Even worse, Christine doesn't like it. Wha...Wha....What?

This is a good one folks, probably a borderline classic (not quite what I had promised you but it will have to do). The car takes over Arnie's life and ruins his relationships with his friends and family. Oh, and the car goes off on some late night jaunts by itself to get rid of those that have come between it and Arnie. The image of Christine, in flames, chasing after Buddy is a great one. Most of the kills either take place off screen (for instance, we cut to black just before Christine tears a guy in two) or are completely bloodless. We learn the car's previous owner "killed himself" in the car and that his wife and daughter also met their ends on it's vinyl seats. There are some good supporting performances from Robert Prosky as Mr. Darnell (the guy that owns the junkyard where Arnie restores Christine) and Harry Dean Stanton as the detective investigating the mysterious car related deaths that seem to point directly to Arnie and his car.

Hmmm, I feel like I'm missing something here. Ok, isn't it kind of weird that Christine's radio can only get 50's rock and roll? How did Christine cause Leigh to choke on her muffin or whatever that was she was eating? How the fuck hard is it to get away from a car that's chasing you? Too often, her victims tried to outrun Christine in the middle of the road. What the fuck? Go in a building or off road it if that's your only option. Wouldn't you think it strange that her odometer goes in reverse? Finally, I fucking hate George Thourogood's "Bad to the Bone". I guess this was one of the first pictures that it appeared in, so I'll give it a pass.

It's a recommendation! It's certainly not the best work Carpenter has done (in the documentary, he said "I just wanted to work"). It's got a solid, and subtle, Carpenter score, lots of decent rock and roll (except that song I mentioned), some great visuals and solid performances. I can't imagine the source material as being anything other than terrible. I mean, an evil car can work for just under two hours but how the fuck am I going to enjoy the premise for 10-20 hours?? Not happening. There's a reason the Maximum Overdrive story (what was that called?) was a short story. Anyway, good picture, buckle up my friends and enjoy. It's going to be "a hell of a ride" (I think I took this quote from Total Recall). Also, the last shot promises a sequel but, come on now, that would be ridiculous.
Posted by brian at 7:16 PM

Me love this movie long-time! Especially when his dad grabs him and he says, "Get your hands off me, motherfucker." The swears add so much, unlike most movies where they're artlessly sprinkled everywhere.