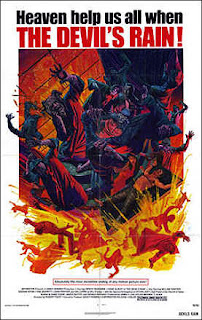 I guess this is just another one of those devil films that were so in vogue back in the 70s except this one takes itself a bit more seriously then most. That's what happens when you cast Ernest Borgnine as goat-man-devil-thing, in the flesh, and have him face off against a family that includes the likes of William Shatner and Tom Skerritt. This is one of those films Shatner did while on leave from his duties as captain of the Enterprise and it is a pretty good one although the story is a bit too muddled, the effects too repetitive, the acting too hamhanded, and so on.

John Travolta shows up at some point in this thing as well. This, not Carrie, is his introduction to filmdom. Be warned, it's a "blink or you'll miss him" type part. I watched this twice over the weekend; drunk then sober. I guess I blinked twice. Although, this picture does ponder the age old question: If your soul has been collected by the devil (and stashed in his "devil's rain" aka poreclain soul catcher) causing your eyes to melt away, then does it even matter if you blink?

Shatner plays the oldest son of the Preston clan. Ida Lupino (lots and lots of TV) is the soon to be captured matriarch of the family and some guy shows up briefly only to melt away into the rain as the father. I guess back in the pilgrim days, the Preston's stole a book from some guy named Corbis (Borgnine) who is, in fact, Satan. Or, maybe he was just a vessel for Satan. I really had no fucking clue. Anyway, he wants the book back since it contains the names of all the souls he has claimed and makes for some good bathroom reading material. He's sick of reading the same copy of good housekeeping over and over. After Ma is taken, Shatner drives out to some southwestern ghost town to confront Corbis and gets challenged to some prayer reading duel. Since, official Satanist, Anton LaVey was the film's technical advisor we can be fairly certain that the duel was authentic. Satan, reading his own prayer, would challenge Shatner who would be reciting the Lord's prayer. It's not a fair contest though because obviously the followers of Satan will not be swayed by Shatner (not yet a Satanist). Anyway, the Shat is converted and, thankfully for him, gets to leave the picture for a while. Thus, it's up to Tom Skerritt, his stache, and his psychic wife to save the remaining Preston clan (I guess themselves) from eternal damnation, hellfire, etc.

Eddie Albert (Green Acres) shows up as a kindly, non-satanist, doctor and Keenan Wynn (westerns) appears briefly as a hellfire-sanctioned Sheriff. The ending is a blast if you can tolerate about 10-15 minutes of occultists melting in the devils rain. I could, but only because I passed the time trying to spot Travolta who I guess washed off this set and into "Welcome Back Kotter". The very last scene is fitting considering that the devil is really not one you can trust even after you've caused him and his hordes to melt into the earth. Also, of note, this was directed by the guy that made those Abominable Dr. Phibes pictures. After this one endured hellfires of critic-dom, he was banished to the damnation of TV. Fuck man, for a movie where everyone melts, characters lack eyes, this still managed to be a PG-good time once I sobered up.

Seriously though, everyone melts in the end. It goes on for way too long. Enjoy.
Posted by brian at 9:49 PM

What film features that thing on your logo?

That would be 'The Being'. I own it and love every minute of its badness. I'm saving a review for a special occassion.