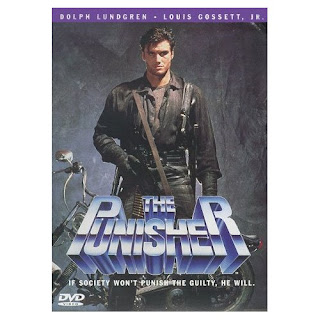 After seeing Punisher War Zone I decided to go back and visit the one that started it all but then I learned that these films aren't really connected, there's no trilogy...each one is what they like to call in Hollywood a "reboot". I guess that's become popular these days since Hollywood is constantly fucking up our comic book movies and needing to re-do them. I've never heard the term used for any other genre. Why can't they "reboot" the Star Wars prequels or The Happening or The Hills Have Eyes sequel to the remake? Anyway, it turned out I had never seen this one which surprised me a little. I always felt the punisher was one of the more interesting comic book heroes (I think I was the only one). His is the rare case where his alter ego, Frank Castle (or is punisher the alter ego? I forget how this works), is actually dead, not in the literal sense. The moment his family was wiped out Castle ceased to exist and he became the punisher. There's no going back to Castle. His is not really a story of redemption so much as a story of vengeance that can only end when he dies. Like many heroes, the punisher works mostly at night because, I guess, that's when most criminals go to work. During the day he lurks in his subterranean lair (it's a sewer) and prays in the nude to a god that will not listen. He's not asking for forgiveness or answers or anything like that. He knows he's going to hell. I think he's just lonely.

Anyway, this punisher guy is played by Dolph Lundgren in this one, the first one. He definitely looks the part except I can't, for the life of me, figure out why they didn't give him the skull t-shirt. That was a mistake I think since it's sort of his identifiable mark. I could see a thirteen year old today coming across this picture on TBS and quickly changing the channel when he so called realizes this is one of those crummy 80s pictures that Dad likes to watch and not a comic book movie that all thirteen year old boys are required to watch. That kid would be wrong and would probably grow up to be at least a fraction worse for it. This is a much much better picture than it has any right to be.

The opening credits are usually a good place to start and these are some good ones. We're treated to comic book drawings of villains being shot off the screen as an honest to god real orchestral pulse pounding score serenades us into euphoria. The movie begins much like the 2nd reboot began; with an asshole mafioso being acquitted. He stops to talk to the press and says a line we actually believe he believes that goes like "if a man is innocent, justice prevails" and then he has this to say about the so called punisher "if he ever shows up within a thousand yards of me, he'll find out what the word punished really means." Like most mafioso douchebags, this guy is not really a man of his word and he will soon find out what the word retribution means in spectacularly brutal fashion. Of course, this is the 1980s so the violence isn't quite as over the top as War Zone but it's certainly still to be appreciated. We don't need to see organs flying out of bodies or whatever to understand the consequences of the punisher's actions.

I'm not sure why all the internet fanboys weren't up in arms when this thing came out. The 1st Punisher reboot caught a lot of flak for being set in Miami and not New York City which is apparently the only place these stories can take place. Well this fucking thing was filmed in Sydney Australia ya bunch of fuckos and I have to think that's a step below Miami. The city itself is never named but how the fuck can Punisher not even be in America? It's an abysmally awful choice by the director Mark Goldblatt and his studio New World Australia. This is such a slap in the face to all of us fucking Americans. How would you douchebags like it if we took an Australian treasure like Crocodile Dundee or something, put him in a movie and set the god damned thing in New York or Los Angeles? Christ.

Anyway, the cast in this picture is pretty impressive. I mentioned Dolph Lundgren but haven't even gotten to the real casting coup yet; Oscar winning actor Lou Mother fucking Gossett jr. Yeah, he's in this. He's Frank's old partner and current Sydney detective Jake Berkowitz. If it sounds like a white guy's name that's because it is. They replaced the white actor that was originally in the picture with a vacationing Lou Gossett who decided he needed some time away from the wife. Can't pass up a chance to grab an oscar winner, right? The name was already in the script so they kept it. He filmed his part in about ten minutes and is pretty much useless until the end and even then he's pretty fucking useless always showing up a few minutes after punisher leaves. He has one fantastic emotional scene with Punisher after Punisher has just been arrested for rescuing a bunch of mafia kids from the Yakuza (long story) where he addresses Punisher as Frank and tells him he's sick because of what he's done and what the fuck does he call 125 murders in five years to which Punisher responds "a work in progress."

I really enjoyed the performance of Jeroen Krabbe who played the mafia don as a somewhat sympathetic character who loves his son almost as much as he loves the family business. Kim Myori played the Yakuza crime boss named Lady Tanaka and was the kind of cold hearted bitch that would feed her brother a nice meal and slit his throat as soon as he was finished and, in fact, she did. Some hot blonde broad played her lieutenant the white blonde ninja or at least she did until punisher broke her neck. Punisher took a beating in this picture and I guess that makes sense because it's the first movie and he's still learning the ropes. At one point he's overwhelmed by a bunch of ninjas at an amusement park and placed on a torture device commonly referred to as the rack. We learn how far this guy is willing to go when he sees his only friend named Shakes the bum on an adjacent rack. Torture has no effect on a guy like the punisher, a guy with an incredibly high threshold for pain coupled with an absolute willingness to die. What about the torture of a close friend, a drunken bum that claims himself to be an actor, a guy that punisher plys with booze in exchange for information? Will that have an effect on the guy? Nope.

The only people that can get through to the guy are the children. Yes, punisher used to have two children of his own until they were blown up by the mob. He even has the picture and the dental records to prove it. Often he sees them reflected in the eyes of the mafia kids and then he becomes, for a brief moment anyway, a big softie. Wow, forgot a plot description so here is s a brief one for you: In five years time punisher has decimated the local mob to the point that the Yakuza can waltz in and take over. Yakuza make fun of Italian mafia and steal their children to sell into slavery. Italians try to make a deal and show up at a fancy restaurant but it's actually an ambush since apparently all the other diners (including a little old white lady) are working for Yakuza and shoot the place up which is hilarious since Lady Tanaka waltzes in and tells the few survivors about the poison they just drank. Anyway, Punisher rescues all the children except for one, you guessed it, the son of the boss. The boss and Punisher team up to rescue the boy with Punisher telling the boss "when this is over, you're dead." Can either of these two loveable outcasts be redeemed? Is punisher a man of his word? Why am I an hour and fifteen minutes into this thing with nary a naked breast in sight? I can answer the last one. Punisher has no use for women, no, just vengeance. Vengeance and children.

The Punisher Origins is an entertaining movie, a near forgotten gem from a time that time forgot, the time just before 1990. Lundgren is, like I mentioned earlier, good in the role except for his voice which at times seemed to be trying a little too hard to be menacing. English is not really his first language so maybe the guy was just trying to enunciate correctly. I tried to keep a count of dead guys but it didn't take long for me to throw up my arms and just give up. You'll probably be a bit surprised to learn that this picture is also a bit funny at times. I liked when the mob guys were on the pier waiting for a shipment to come in and one of them radioed a lookout named "red 2" and asked "what have you got" to which red 2 responded "bad kidneys...gotta take a leak." Lots of throwaway lines like that which enhanced the overall flavor of the picture and also the racist line where the one italian guy scoffs at the Yakuza 75-25 proposal and says "I'm not gonna be a salary boy to a bunch of nips". I didn't actually find that part funny at all. Racism is never funny. Well, wrapping up...what he have here is a pretty good action picture the likes of which the world has seen many times over but one that I can whole heartedly recommend. I just wish they had wrapped it up with a better fight. It's a pretty tired cliche where two guys wrestle for control of a gun, the gun goes off, and then one guy stands up and we think the guy on the ground must have been the one that was shot but no, we've been tricked, the guy that stood up was the one shot all along. Then again, I don't know if I've seen that cliche before 1989 or, more likely, I just don't remember. If this is the origin of that particular god awful cliche then I dub this the Casablanca of action pictures.
Posted by brian at 9:19 PM

When I was 13 I did pass this movie on cable- because he ain't Wolverine! But I do need to see it now.

And I'm sure you've seen racism at its least funny in the Aussie classic "Romper Stomper".

You need to watch this. I'll bring it in for you at some point.

Yeah, 'Romper Stomper' is a classic. One of Crowe's finer performances. And I think the co-lead actually died in real life, art imitating life style, and he was pretty good too.