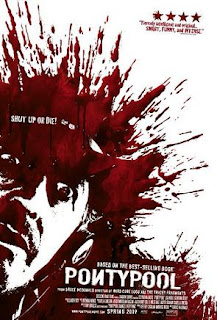 I debated throwing this one in with my previous entry of quicky reviews but then decided it was so good it deserved its own write up. Pontypool is a little rural town somewhere in Ontario or Ottawa or one of those Canadian provinces I have trouble telling apart. This is a small story, takes place in winter...or maybe it snows in Canada during the summer so let's just say it's an indeterminate season. Anyway, like I said it's a small story, there's some snow, but that doesn't bother our characters because they spend the movie holed up in a little basement radio station out in the middle of nowhere. This could almost be a play. We got few characters, a single set, lots of dialogue, etc.

Basically what the story involves is a man, a dj type man, who is actually a dj and played by Stephen McHattie. I've seen this guy before, I mean he's been around since the 70s apparently but I didn't notice him until he had that little part in Cronenberg's History of Violence. He played the older psychopath who got his face blown off by Viggo Mortensen. Before that point, however, I latched onto this character, couldn't take my eyes off him. He was all magnetic and shit and with the type of voice that could put you to sleep or turn your hair white. What a presence, I thought, this guy's gonna be a star. Well, after that I saw him in the picture called Kaw and, while still good, I didn't quite feel the same about him. Well, watching Pontypool I'm seeing all that promise I noticed in History of Violence finally coming to a head. This is a great performance, probably the best I've seen in a horror picture in a while. What this movie accomplishes is to take that wonderful voice and put it on the radio and take that wonderful, world beaten face, and put it on camera. His voice is almost the star of this thing.

McHattie, like I said, plays a DJ, named Grant Mazzy. He looks a bit like what's-his-name, that Imus guy, and even wears a cowboy hat. He used to be a big time shock jock in the city but was fired for some unknown reason and exiled to small town morning radio show announcing school closings and interviewing local theatre troupes and various other demeaning shit. He still trys to put his own spin on stuff but is mostly kept in check by his brow beating producer (and real life wife, Lisa Houle). Also in the studio is a young engineer, and veteran of the war in Afghanistan, Laurel Ann (Georgina Reilly). On the phone is traffic reporter and "eye in the sky" Ken Loney (Rick Roberts). As the morning progresses, reports trickle in of some kind of "insurgence" of people, surrounding a Doctor's office. Loney witnesses the uprising and reports back, at one point describing an "explosion of people". Then, fearing for his life, he retreats (he reports, remember we get this all via his phone). What's going on in the little town of Pontypool?

The brilliance of the picture, at least for most of its run time, is that we don't know. We know as much as the three characters in that little underground radio station. Is this all just a hoax? Is there some sort of outbreak, a plague, another, god forbid, zombie holocaust? At one point, Mazzy, to his own disgust, interviews a local singing group and one of the young interviewees, a girl, gets stuck on a single word (I forgot to take notes and I can't remember the word, sorry). It's a subtly creepy moment. Mazzy notices, his eyes widen a bit. The singing troupe leaves and the situation continues to decline from there.

The nature of the plague (if that's, in fact, what it is) is revealed in every review I've come across. I'll try to hold back here, not spoil it too much. It involves certain words, words of endearment, militaristic words, words that have so many meanings it's almost as if they have none at all, English words. It's also about a mob of people who have lost the ability to rationalize. What does one thing have to do with the other? There is minimal violence in this picture, one gross out moment. There is also a doctor who sneaks into the station and who, albeit briefly, brings the movie to a halt with his explanations. Is the doctor infected? How does the infection spread? Where did it start? Will the picture even bother giving us answers? Also, why is it that the things we hear about, the simple threat of what's going on outside, that fact that we're not even sure if anything is happening, is far more frightening than the actual happening? Yet, movies today almost always insist on showing the unknown, explicitly, rather than hinting at it.

I guess the lesson I take from all this is to simply think before you speak. Actually, listen to what you're saying. If it makes no sense, it's probably best to leave it unsaid. The characters in this thing find this lesson much easier said than done. Their livelihoods involve the voice for god's sake. I don't know man, I appreciate a film like this. It's got an intriguing premise, some great characters (even if Houle does become a tad bit annoying towards the end), and a solid setting. Where better to set a possible end of the world scenario than in a radio booth? That way we can focus on things like character, tension, and gloom rather than things like quick cuts, cgi effects, and scenes of mass destruction. Those things are good too, but let's change it up every now and then. We'll still have 2012 in the fall or whenever that comes out.

Unfortunately, this one might be hard to find at the moment unless you live in L.A. or New York or feel like ponying up the $6.99 to watch it on demand. Since it's probably as good, or better, than most everything playing in theatres right now I'd argue go for it. It's well directed by Bruce McDonald (The Tracy Fragments and some killer wave movie called Killer Wave). The actors all give good to great performances. The score, well I don't remember the score, so I can assume it was pretty spare which would fit the material if true. The end might be a little too cute, a little "bang us on the head" in its point making but, who knows, maybe that was from the source; a novel called "Ponytpool Changes Everything" by Tony "Don't call me Anthony" Burgess.

Shit man, there's like this new wave of Indy horror coming out now. We've got this, The Burrowers, uh...I hear some people like Splinter, but personally I think they should just rewatch The Thing, um...there's The Midnight Meat Train. This year we also had a competent remake of an almost classic, My Bloody Valentine. Also, an average remake of an overrated classic, Friday the 13th. So, yeah...we're getting some decent original shit mixed in with some ok unoriginal shit. Oh and everyone seemed to enjoy Drag Me to Hell even though it made about 500 bucks at the box office. So, yeah...there's some kind of horror revival going on at the moment. Unfortunately, too many of these pictures are skipping theatres and going straight to Comcast on demand. I'm sure there are other ones I liked. The Signal was ok in parts.

Anyway, Pontypool deserves a spot near the top of that list. It's probably more creepy than scary. The premise is kinda absurd when you stop to think about it, but i didn't so I bought into it. There's only one real gore scene and also no nudity. And, no name actors, although McHattie is clearly a better actor than Lance Henriksen at this point in their respective careers. Is Henriksen still a name outside of genre circles? Wait, was he ever? If nothing else, see this one to discover the point where Stephen McHattie should have shot into the stratosphere of character actors but didn't because no one saw his movie (I forgot he was in Watchmen too, but no one saw that picture either).
Posted by brian at 5:30 PM

Great movie. Your man love for McHattie is justified.

Damn right. Unfortunately, he doesn't have too many projects coming up that I'd be interested in. It seems he plays this recurring character in some Jesse Stone series of movies for TV. I'll have to wait and see what "The Timekeeper" is all about. He was on the "Beauty and the Beast" tv show with Linda Hamilton. Hopefully, Cronenberg will find something for him to do in some of his upcoming projects.

I just watched 'Killer Wave' (a 3 hour mini-series from the director of 'Pontypool') and McHattie was, by far, the best thing in that as well. He was incredibly enjoyable to watch. Tom Skerrit was wasted and Anges McFayden, the guy that betrayed Braveheart, reminded me of Ricky Gervais minus the funny.