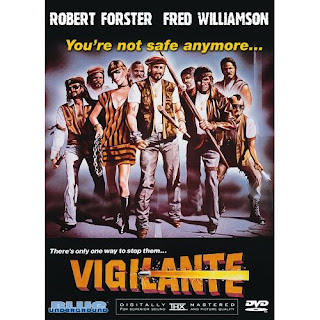 Back in the early 80s New York City (and it's many burroughs) was not a safe place to live. Gangs ruled the streets. Thousands of people were murdered every second in NYC alone as the result of gun violence, car violence, or crow bar violence. Thousands! It had gotten so bad that a guy couldn't even go out after dark to "get a pack of cigarrettes" from the corner store (according to Fred Williamson, leader of the vigilantes in Vigilante). The police force was basically useless; understaffed, underpaid, undersupplied (no kevlar, rude 911 operators, etc), etc. The courts were just as ineffectual, full of corrupt attorneys and judges. The prisons, with their revolving doors, weren't much better. We were losing our streets to the scum.

Against this filthy backdrop, stands a man, a man with blinders on, a man that believes in the system. Eddie Marino (Robert Forster), a good guy, a good mechanic, good husband, good father, etc. It's a perfect life kinda scenario. His auto shop buddies are into the whole vigilantism thing, but not Eddie. He has a sweet little home in the suburbs, a place where crime isn't welcome. He spends his days at the shop and his evenings and weekends with his little boy and his wife (picnics, radio control airplanes, the whole works, etc). Things are going pretty damned great if he does say so himself. The only way things could get screwed up would be something terrible happening. Perhaps a relative dying, a fire, foreclosure, maybe a dead pet or something like that.

Anyway, after his boy is shot dead and his wife beaten and raped by gang members, Eddie's outlook changes a bit. Maybe that vigilante bullshit the guys down at the shop are into isn't such misguided bullshit after all.

Still, despite this tragedy, Eddie continues to trust in the system. The system didn't kill his kid and rape his wife, some gang did. I'd like to take a moment to comment on the gang. This is the kind of gang we only see in the movies (particularly, movies from the 80s). We got a Puerto Rican (the leader), a black guy, an Asian, a white guy, and some blonde bimbo (she's dating the leader). This is an equal opportunity gang. Skin color isn't nearly as important as whether or not you're willing to pull the trigger on a young child cowering behind a shower curtain or whether you're willing to beat a housewife and violate her in the backyard in full view of her cowardly suburbanite neighbors. Very progressive gang as you can see.

So, like I said, Eddie still believes in the system. He cooperates with the Assistant D.A., signs some papers, wants to see the bastards punished for what they did. Unfortunately, the case is assigned to a corrupt judge, an "asshole" according to his attorney. The defense attorney is played by Joe Spinell (Maniac) and therefore pretty sleazy. He takes bribes from the gang member that shot Eddie's son. I'm assuming Spinell shared those bribes with the judge (Vincent Beck) otherwise they don't really make sense. We'll just assume I guess. Maybe I'm not really understanding the way the system works is also possible. Anyway, Eddie doesn't really think a two year suspended sentence is much of a punishment and, considering this was just the indictment, it doesn't really sit well. The killer goes free and Eddie gets thrown in jail for trying to beat the shit out of the judge. Some system we got here.

I liked this picture even if it's sorta just a highly entertaining Dirty Harry knock off. Forster gives a good solid performance. Is there a more underrated actor out there? He's one of those actors that seems like he's not acting most of the time. He always just seems mildly uncomfortable. When he walks through his house (after his son was murdered and wife raped) his reaction is to almost have no reaction at all. It's unimaginable to him, he's in a daze, just sorta simmering ready to boil over, but not quite getting there. We don't see the guy actually "act" until the courtroom scene. I'd argue that the more showy he gets ("you killed my son!", etc) the less effective his performance is.

Fred Williamson is the other big actor in the cast. He plays a guy named Nick, a friend of Eddies, but not a good friend. For most of the picture, he just looks cool and walks around with his hands in his jacket pockets (I believe Williamson trademarked this particular look). This is the kind of guy who, when chasing a drug dealer, will stop to pick up the wheelchair bound guy that the drug dealer knocked over before continuing his pursuit. He's also pretty ruthless in his beatings; lots of kickings while they're down, dangling out of windows, shotgunning mob kingpins, etc. I liked his brief exchange with a hood walking on the sidewalk:

Steve James shows up in a small role as a young idealistic police officer. He wants Williamson and his boys to knock off the vigilante bullshit already so he can do his job. There was a time when James was one of my favorite actors (appearing in American Ninja, Delta Force, Brother From Another Planet, etc). He had a strong physical presence, a gift for gab, and was someone who could hold his own against the likes of Williamson. Unfortunately, James died back in 1993 as a result of pancreatic cancer. Would have been nice to see where his career might have gone. Here, he's just a rookie cop in over his head. He exits the movie when - spoiler - he and his partner (some old white guy) are brutally murdered by the same thugs that destroyed Eddie's life (oh yeah, forgot to mention his wife decides to leave him). I assumed this was some sort of frame up. The thugs drove a van that resembled the vigilante mobile. Maybe get the cops to take on the vigilantes and get off their backs. Nope, it was just the thugs being bloodthirsty and not thinking more than one step ahead. If I have one complaint with the movie, it's with the script, which doesn't seem too interested in following through with some of its own ideas.

I also expected Eddie to have a few more layers. He basically goes directly from point A to point B. One moment he's a nice guy. Then, he's capable of gunning down crooks in cold blood. The scene where Eddie blows away the gang leader in his pad (I laughed when I realized this guy, for all his stealing and raping, still lived in a studio apartment) is a good one. Williams does something in this scene that might cause him to reconsider his path in life, or at least give him something to regret, but like other issues that pop up from time to time in this picture, it's never addressed again. Ok, another spoiler, Williamson blew away the girlfriend of the gang leader as she was coming out of the bathroom (it was an undesired reaction). He gives a look immediately following that implies moderate sorrow. That's pretty much it. Conflicting emotions are not where this picture's heart lies.

There's a subplot involving a gangster named Mr.T who is shown on the news chastising the media for stereotyping Italians as gangsters. Next he is shown doing some sort of money for drugs exchange down on the docks before - spoiler - being blown away by Fred Williamson. Williamson does some pretty nifty detective work to make his way to Mr. T. He beats up a small time corner dealer ("where do you get your stuff?") which leads him to a pimp, who he runs off the road, which leads him to the head of the New York Mafia who apparently, is not against making deals down by the docks in person, and alone. I respect that.

William Lustig (Maniac) did a pretty good job directing this one. His action scenes aren't perfect. There's a car chase that's unexciting, has no sense of scope or direction, and goes on for too long. There's plenty of blood, a little nudity (not the good kind) and a scene where a gang member's woman gets propelled from a bedroom into the bathroom (and into a tub) with a shotgun. Anyway, this is a solid one full of good characters, despicable actions, and I'm sure there were some other characteristics. Check it out.
Posted by brian at 5:19 PM

This movie sounds like a seed of the genre. People writing comics (Punisher, Teen Titans) and designing video games (Double Dragon) must have seen it.

This movie sounds like a seed of the genre. People writing comics (Punisher, Teen Titans) and designing video games (Double Dragon) must have seen it.

I see what you're saying. Towards the end, it definitely feels that way. Lots of foot chases, car chases, shoot outs, fights at the top of a tower where the loser will most likely be splattered below. You could definitely make a game out of this. I'd definitely play it.