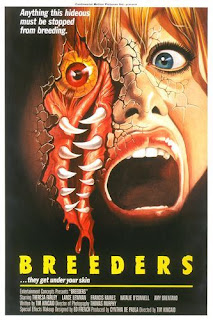 If aliens ever do invade our world I'm sure they'd immediately get to some serious raping like this film hypothesizes. Breeders is that all too common type of film involving a pretty cool looking creature saddled with a putrid story involving constantly naked women, atrocious acting, pools of spunk, and some more naked women. In other words, a hearty recommendation.

I'm actually not sure where to begin with this one so I'll just start at the beginning. A young woman is driving around a bad part of Manhattan with her, much too forward, date. It's the middle of the night. She demands he stop so she can get out. She encounters an old German man out walking his dog. Old geezer says she should know better than to walk through this part of the city after dark, all alone. Old geezer doubles over in pain. Old geezer turns into an alien, tears off woman's dress, rapes her (off screen), etc. Rape alien spews black spunk.

That scene basically represents the beginning, the middle, and the end of this picture. Along the way, we encounter several characters; a lady doctor, a detective, a fashion photographer, several girls who have been "around the block" more times than they can count trying to pass themselves off as virgins. Seriously, who are these girls kidding? Basically, the moral of the story is, especially if you're a girl, sleep around. A lot. Don't take any unnecessary chances girls. Just give it up already before rape-alien comes to your town.

There's a story in here somewhere. We learn the alien traveled to earth on a space spore. Landed in Manhattan, made his home in the underground, mauls an elderly bag lady, and so on. The detective and the doctor try to solve the case while caring for the victims at Manhattan General Hospital. Several rape victims have been admitted with acid burns. Also, covered in alien DNA. The actors are unanimously awful. The script, the direction, etc all lousy. The female doctor looks at the victims and says it's things like this that make her want to kill every man on the planet.

What we got though are several completely naked women. We got a scene where a fashion model strips off all her clothes and, as soon as the photographer and her gay friend leave the room, begins writhing around on the floor. It's her Jennifer Beals moment. Then, the gay friend returns and morphs into rape-alien.

So, we got a movie inspired by Alien, Invasion of the Body Snatchers, and possibly The Thing. Only with rape. The creature can apparently take many forms as long as that form is human. No rape-kitties or rape-plants or any shit like that. The alien looks sorta like Brundle fly only with a giant priapic penis (looking like a tentacle) spewing it's black stuff all over the fucking place.

This is not really a good one folks. The suspense is minimal. The only question is how long before she takes off that robe and is she trimmed? Whenever a new character is introduced we know exactly what's going to happen to them. There's one plot line, involving this movie's version of a virgin about to get naked and take a bath, that is completely dropped. We never see the broad again. I guess the two main characters, besides rape-alien, are the doctor (Teresa Farley) and the detective (Lance Lews man) who is apparently the only cop on the entire fucking island.

The end is incredibly bizarre. I'll give the film minor credit for at least being way out there, and borderline inspired, for one scene. It involves the rape victims waking from their slumbers and being psychically drawn down into the New York sewers. Once there, they gyrate, hug, and fondle each other, while quite naked, in a vat filled with alien spunk. I guess this is where the picture earns its name.

I'll just sum up by saying this was well worth the $3.99 I paid for it. I'm not being sarcastic with that statement. I mean, the movie is a piece of shit but at least it has the sense to treat this material like Shakespeare. Teresa Farley is probably the worst actress to star in a movie I've reviewed. Seriously, check out her emotions in this thing. She's a fucking cold fish so it's no wonder the alien stays away from her. The alien design is good; scale-y, squid-y, spew-y. This is more than I wanted to write about a plot-less movie with a raping alien.
Posted by brian at 6:16 PM

I didn't even read the review (yet). I want it.

That poster is pretty amazing, isn't it? Maybe you should skip the review.

Why wasn't the movie as good as that poster? The only suspense I felt was when my glass became empty and there was no refill in sight.

If only you had picked up more booze. You blew it.

So, how does one avoid being a victim of the rape-alien?

If they are Breeders, are their any offspring?

And, three, surely there are woman out there lonely enough to sleep with the alien without all the rape.

In 'Starman' and 'Howard the Duck' women sleep w/ aliens, sans rape. Although, in 'Starman,' the alien inhabited a human body.

And Dan, was your glass empty because Brian had grabbed it and dumped it in your lap again?

This seen is very interesting that The detective and the doctor try to solve the case while caring for the victims at Manhattan General Hospital.