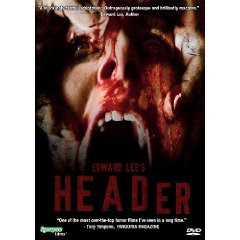 Shit man, I can't think of another blog that would follow up a review of a Humphrey Bogart classic with a review of something like this. Apologies to Bogart for even mentioning his name in this one. This is the kind of movie where the creative minds behind it (I guess that would be novelist Edward Lee and director Archibald Flancranstin) think up the most disgusting act imaginable and then throw it into a generic police procedural. That disgusting act I refer to would be what's known as a "header". I'm embarrassed to explain what a header is. My embarrassment speaks volumes.

Our little story begins with the dim witted Travis Clyde Tuckston being released from prison somewhere in a deep south mountain community. Travis goes to live with his crippled grandfather, also known as "gran pappy". There's a parallel story involving ATF agent, Stewart Cummings, who works out of a little office in the middle of nowhere with a couple fellow redneck agents. We know he's an ATF guy since he wears his ATF shirt everywhere, even when he's working undercover or trying to set up a deal with some bad people to sell some drugs on the side so he can pay for his invalid wife's prescriptions. Meanwhile, some dead women turn up with holes in their heads. Also, seminal residue in the holes. I'm still not sure where they get the title of this picture from. Neither is the dense Cummings who is constantly asking his partner "what the fuck is a header anyway?" Yes, he is still asking this question even after the evidence is staring him in the face.

Well, this is a piece of shit alright. Jack Ketchum (writer of such works as "The Lost" and "The Girl Next Door") has a cameo (unnoticed by me) so I guess it's earned some street cred. Still, it's too fucking ridiculous to take seriously. I mean, neither of the leads (Cummings and Tuckston) are the least bit compelling. The only character in this thing that held my attention was gran pappy and that's not a good thing to be honest. I mean, what kind of old geezer would allow himself to appear in a movie where his grandson holds him up out of his wheel chair so he can put his limp dick inside a hole in some prosthetic head (I'm assuming they didn't really kill these girls for the picture because if that's the case then these guys can't even make a convincing snuff film).

So, the story goes that Tuckston get's out of the big house and hooks up with his demented gran pappy who convinces him to go pick up girls and bring them back to their tar paper shack for a little header action (it's pronounced "headahhhh" in the movie). Gran pappy shouts things like "we're gonna have us an old fashioned headahhhh!!!!!" while slapping his useless leg. His grandson is just retarded.

While those two inbreds are having their fun, Cummings goes on a rogue investigation to solve the murders. My favorite part was when he was driving to the state police forensic lab and the exit sign on the highway was actually labeled "forensic lab". I don't remember what happened at that lab though. Not sure if they even had a scene there to be honest. Alright, I have something to confess. I saw this fucking thing about a month ago and have since lost my notes. I'm winging this mother...

The subplot involving Cumming's bed ridden wife was sorta interesting. Turns out she wasn't even sick (who was writing her prescriptions?). She was always tired at night because she spent her days whoring herself out. No energy to give herself to the hubby when he got home. Or, maybe she was just wracked with VD. I can only imagine what the hubby would do if he found out her secret? You don't think....

This pretends to be some sort of descent into madness type picture. Well, gran pappy and Travis are already there. Cummings starts off as a bad guy. I mean, this guy sells drugs that he confiscates (did I mention he wears his ATF shirt during these scenes?) and I think he murders some guys at one point. So, not a guy we can get behind unless you're getting ready for some headerin (is that a word?). We hate his wife since she's a whore. We can't stand the two caricatures that are gran pappy and Travis (although, they satisfy a need for intermittent unintentional comedy). Not one of the header victims resonate; we got a girl walking down a wooded road alone. She says hi to Travis who immediately punches her in the face. One girls a prostitute. One victim is actually a guy who I seem to remember was involved in some shady financial dealings with gran pappy involving cobbled shoes or something.

Eventually the stories of Travis and Cummings collide in an explosion of unsatisfying, unconvincing violence. I don't know. I think there could be a good movie made of this material. Maybe headers exist, maybe they don't. The picture is almost completely lacking in atmospherics (admittedly, a challenge when working with no budget), a reasonable story, capable performances, etc. If the goal was to repulse, this is a failure because to do that the subject needs to be taken seriously. Unfortunately, this doesn't really work as camp either. I would like nothing more than to enjoy a picture where a 90 year old cripple instructs his grandson on the finer points of giving a header like, for example, how to make it so you don't get splinters in your dick.
Posted by brian at 5:52 PM

HEADER's too subtle. They should have called it SKULLFUCKER.

Your last line was freaking hilarious! What annoyed me about this movie is that you do not have to have an enormous budget to make a clever, interesting film, for example "The Descent" and "District 9": small budgets, great films.

I would pay full price to see a 30 million dollar movie about a guy running around the backwoods handing out headers like they were candy!