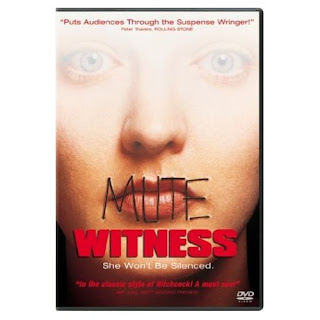 Mute Witness surprised me by being a picture from the 90s which I'd never heard of that actually managed to be pretty good. I'm always finding shit from the 70s, and sometimes the 80s, unheard of by me that's pretty decent. Truth be told, I usually don't even bother looking at 90s shit. Most of it's direct to video, shot on video, cheaper than a two dollar hooker,etc. So, yeah, what a shock it was to stumble upon Mute Witness, a picture full of vibrancy and featuring one of the more sympathetic leads you'll ever see in a movie you're unfamiliar with. Also, lots of tension, solid chases, some Hitchcockian turns, zooming cameras, never ending hallways, creative effects, and..uh...some nice cans.

Our story opens on a film set (inside some vast warehouse) in Moscow where an American film crew is hard at work on a cheap slasher picture. We got a director (who seems like he's 18), his girlfriend (can't remember her job on set), and the girlfriend's sister; a woman who works as the special effects artist. Her job consists of creating the fake blood, making the blood burst on impact, etc. Also, she's a mute girl. I wonder if she'll witness any shit?

Anyway, the shoot closes up for the day and the crew files out. The mute girl (Billy) forgets something and goes back inside, she'll meet the others later. While inside she hears something, sounds like sex. She stumbles upon another set and watches from the shadows. It's a porno shoot with some guy in a mask boffing some blond Russian bimbo. Billy becomes amused and keeps watching (my kind of girl). Suddenly the masked star pulls something out from beneath the pillow, a knife. The cameraman keeps filming. Billy screams. Mutely. The knife comes down, the blood flies, Billy runs away, but can't get out because she's locked inside. What follows is a tense game of cat and mouse between her and the snuff filmmakers as she alludes them in the warehouse. She hides in an elevator shaft, under garbage bags full of body parts, etc. She tries to make phone calls, but cannot speak. Luckily, her and her sister have come up with a "tap" system of communicating. It's clear the director, Anthony Waller, has studied his Hitchcock, De Palma, Coens, etc in the way he constructs these warehouse bound scenes.

Eventually, the action leaves the warehouse and the picture loses a bit of steam. Cops become involved, but are they really cops? What's Alec Guinness doing taking what amounts to a 1 minute cameo as "special mystery guest"? Guinness plays a shady character who apparently is the head of the Russian snuff film industry or some shit like that (I'm sure he had no idea what the picture was about before signing on or even after his five minutes of work was complete).

There's a terrific moment when the snuff guys have to convince the cops that the "mute witness" doesn't know what she saw. She didn't witness a murder. It was all special effects, see. She, as an effects artist, should know better. It's a reasonable explanation made even more reasonable after a shocking demonstration. In a thriller type picture involving people that make thrillers type pictures we can never have enough surprise fake deaths. Well, maybe this picture layered them on a bit too thick.

So, we got quite a few deaths. Some of them real. Some fake. We got some black humor. We got some light humor (such as the weird scene where the director and his girlfriend go out to eat and he squirts the sauce on his meat). We got some almost, but not quite, full frontal female nudity. We got several ingenious scenes where Billy runs from trouble, screaming, but no one can hear a god damned thing. Marina Zudina as Billy is something close to a revelation. She does a great job of making us root for this character who can't talk, grunt, scream, etc. She also gives a striking physical performance (unclothed and fully clothed). All this contributes to her being dubbed the "silent scream queen" (by me).

The other performers acquit themselves ok. Evan Richards and Fay Ripley are fine as the director and his girlfriend (mute girl's sister) but it's not surprising that we still haven't heard of them. Richard's, in particular, is at least able to milk this thing for some comedy (note his reaction to his girlfriend beating the tar out of a policeman). The snuff thugs (couple of Russian actors) are amusingly incompetent, but also menacing enough that we believe they'd have the gall to snuff a mute girl even if it does take Alec Guinness ordering them to do so. They're reluctantly menacing. Guinness is just old. His legacy is in tact because the picture is far from an embarrassment. I guess much of that credit can go to Anthony Waller, the director. He's someone to watch out for. He ratchets up the suspense, the chills, the blood, etc. He knows when to move the camera and when to keep it still. Parts of this picture played like some sort of strange homage to Powell's Peeping Tom. The guy clearly knows his film. Let's hope he doesn't go and blow it with his next picture. Oh wait, he did...and he's done nothing worth talking about since. Oh well. In his case I guess it's too bad he'll always have Paris.
Posted by brian at 4:49 PM