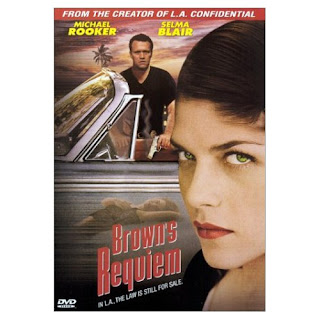 I've been a fan of James Ellroy for probably about fifteen years so it was a shock to find an adaptation of his work that I didn't know existed, made around the same time that my fandom began. And, I'm happy to say, as an Ellroy picture, this one holds it's own with the likes of Cop (based on "Blood on the Moon"). It's no LA Confidential, but it's well ahead of shit like The Black Dahlia (as a movie it's sorta fun, but as an adaptation it's god awful).

Based on the novel of the same name (Ellroy's first I believe), "Brown's Requiem" (the novel) is Ellroy, probably too closely, aping the noir of Raymond Chandler. This is before he found his own bat-shit staccato voice. We got the down on his luck private eye (as well as disgraced former beat cop, repo man, alcoholic, misogynist, etc) Fritz Brown operating in, and around, Los Angeles. As the film begins he is repossessing a car when the owner comes running out with a baseball bat. This kind of thing is all too typical for Brown so he turns to private dicking to lighten things up a bit. One of his first cases involves a fat caddy named "fat dog" (Michael Sasso) who wants Brown to look into the dalliances of his sister, Jane Baker (Selma Blair), who is apparently getting boffed by some tycoon named Solly K (Harold Gould). Solly happens to be old enough to be Jane's grandfather. At first, fat dog just wants to know the nature of the relationship. In typical noir fashion things are never simple. More shit's involved. We got some welfare check scam involving Solly K and the internal affairs cop (Brion James) that got Brown booted from the force. We got people who aren't what they seem, we got innocent dames that ain't so innocent, we got skeleton's in Brown's closet. Etc.

For being a picture I didn't even know existed for the last dozen or so years I gotta say I was impressed. Set apparently in the 90s, the filmmakers (led by director Jason Freeland) did a good job of creating a sort of timelessness to the thing. The score was jazzy, but a subtle type of jazz. The voice over by Rooker, seemed right from Ellroy's text (though I'm too lazy to verify this or not...the book is buried somewhere on my shelf and I forgot to take notes). Peopled throughout are some pretty good character actors like Brad Dourif (as a cancer ridden informant) and the guy that played Jigsaw (as a hardass). We also got one of the actor's from "Law & Order" as a hard talkin detective. Also, Kevin Corrigan (Goodfellas, The Departed, other stuff) makes an appearence as Brown's tragically alcoholic nephew.

Through all this shit is Michael Rooker in probably his best role after Henry. The guy just shows up and we believe him. He's a hard man, but not all that tough. He's reluctant which is why he always asks for the money up front. He's not the brightest bulb but he's smart enough when he needs to be. Rooker shines in the part and manages to create a man who starts out broken, patches himself up a bit, seems to be heading for some sort of redemption, etc. Whether he gets there, I'll leave that for you to decide. It's an interesting arc.

So, this is a good one. I love it when a movie succeeds despite it's budgetary limitations. This one succeeds. The violence that occurs here occurs sparingly and in short bursts. That's appropriate. Prolonged shootouts rarely happen. Bullets are too quick for that. If you're a fan of Ellroy, or film noir, Michael Rooker, or maybe even Selma Blair (sorry, I think the most we see is her in her bra and panties. wait....c'mon, she's playing a sixteen year old. Sickos!) then give this one a shot.
Posted by brian at 5:01 PM

Labels: 1990s, Brian review, I own it you can borrow it, Thriller