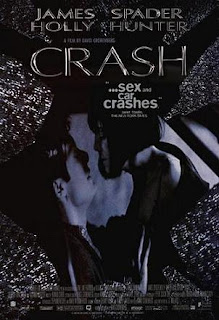 So, I watched this picture about people that get off on car crashes and, I have to say, while I was never bored by it I'm not really sure I understood it either. I'm not even sure if this is a real fetish. I'm afraid what google might bring up if I try to find out. It's a Cronenberg, so you know you're gonna have lots of weird touches like the leg wound that looks like a vagina and eventually gets fucked or even the whole "takes place in Canada" aspect. I mean, I watched the NC-17 version and, I gotta say, there is a lot of fucking in this thing. Only, it's not exactly of the erotic variety. Lots of fucking near car crashes, after car crashes, etc. Twisted metal and damaged bodies are a real turn on to these people.

James Spader starts out as a pretty normal guy who is fucking his secretary (Deborah Karr Unger). Later, he gets in a head on collision (his fault) that kills Holly Hunter's husband while managing to somehow undo Hunter's shirt, exposing her breast. Spader gets kind of turned on while the dead husband, who flew through his own windsheild and into Spader's, lies dead next to him. They both rehab at the same joint, encounter each other in the hall (he makes a weak apology attempt), and later, meet again, at the junkyard. Spader gives Hunter a lift and they end up fucking in his car while it's parked in a crowded parking garage.

Hunter introduces Spader to Elias Koteas who takes pictures of wounds and, in his spare time, recreates fatal celebrity car crashes in front of an appreciative audience. He also dates Rosanna Arquette who has a hideous vaginal leg wound and seems like she's part machine (another fascination of Cronenberg's is the melding of technology and flesh - so he keeps his themes going). Later Spader fucks Arquette (and the aforementioned wound), Koteas fucks Unger, Unger fucks Arquette, and Spader fucks Koteas. Then they all get in crashes and shit. Koteas gets jealous when his buddy stunt driver dresses up like Jayne Mansfield and re-enacts her crash without him, complete with dead puppy in the back and near-decapitation.

The picture ends with Spader causing Unger to crash and then fucking her, as she's possibly near death, in the divider between highways as cars just continue on their merry way. Lots of fucking in this one. Sorry if I spoiled all the fucking. And some dirty talk between Unger and Spader including when Unger asks Spader "if he'll put his penis in [Koteas'] asshole" or something like that. Anyway, lots of sex. A couple car crashes (some off camera..some on) and then more fucking. Not too much talking. It's a quiet movie about fucking and car crashes and the link between them and lots of other shit I don't really understand. Good performances. Lots of baring of souls and various other parts. I'd still rather watch this than the picture of the same name that won best picture a few years back. Recommended for sick fetishists or Cronenberg fanatics or for people that want to watch a movie called Crash.
Posted by brian at 5:32 PM

LOL...that is the most unusual discription of CRASH I have ever read. The movie does have a lot of non-erotic sex in it...which is the whole point. James Ballard (James Spader) and his wife Catherine Ballard (Deborah Kara Unger)are involved in an open marriage. They still love each other but are unable to be sexually gratifified by their respective spouse. Thus they seek sexual thrills outside of their legal union and return home to share their exploits hoping to copy the experience and reignite their passion. Definitely agree...would much rather watch Cronenberg's CRASH than the Oscar one.

Wow, I should really start taking notes during movies. Thanks for pointing out that Unger and Spader were married. I was under the impression she worked for him (although, in my defense, the lines illustrating relationships were blurry). Also, looks like I mangled her middle name a bit. Thanks for reading.

And, yeah, CRASH (the oscar winner) is a piece of shit, I think we can all agree on that one.

Whoa, I don't agree!! I loved 'Crash'...the Oscar won, not the auto erotica one. No one has ever been able to give me a reason as to why they dislike 'Crash.' It always seems that it's white males who don't like it so I wonder...is it the theme of racism that makes detractors uncomfortable?

Nothing about the movie made me uncomfortable. It's one of the most heavy handed, and insulting, pictures I've watched though. If I want to watch a good movie about people "crashing" into each other I'll watch Magnolia again or maybe Sasha Grey's latest skin flick. The last scene with the former mr reese witherspoon was laughably predictable.

Just curious Meg, have you watched it since it came out? Have you seen it more than once? I don't disagree with the message. Just the execution. I've never really fetishised getting slapped in the face.