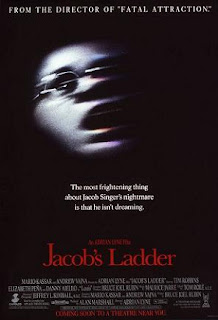 Revisiting Jacob's Ladder after all these years, a couple things occurred to me. First, shit, I bet this thing, with it's flash forwards and flash sideways, inspired "Lost" (at least a little). And, second this might be the biggest downer of a mind fuck I've ever seen. Most mind fucks end and you just want to talk about the experience (good or bad), attempt to put the puzzle together in reverse, whatever. This one ended and I just wanted to crawl into bed and think of ways to stave off my own demons. This is not a feel good experience.

But it is an experience worth experiencing. Directed by Adrian Lyne (Fatal Attraction) and starring Tim Robbins (Bull Durham), Jacob's Ladder is the warped tale of an American soldier (Robbins) wounded during a horrific battle in Vietnam and shipped back to the states (to a city that vaguely resembles 1970s New York City) where, despite having a doctorate in something, he becomes a postal worker (no shame there - trading in one uniform for another). His name is....well....Jacob. One night, on his way home (it's very late), he falls asleep on the train while reading a novel (I'm sure the novel is significant, but I forgot to check what it was), and misses his stop. He finally gets off at a deserted station, discovers he's locked in. On the other side of the tracks is an exit that appears open. He begins to cross, steps in a deep puddle, dances in front of an oncoming train while blinded by the lights, and finally dives to safety as weird faces stare down at him from the windows of the train that doesn't even stop. Shit gets even weirder from there. Jacob has a girlfriend (Elizabeth Pena) and apparently an ex-wife and three boys, one of whom (MacCauley Culkin) was killed in an accident. Anyway, Jacob's life seems to be spiralling from this point on. His doctor gets blown up in his car. Someone seems to be following him. He sees demons everywhere he goes. Heads do this weird jittery thing in front of him. His girlfriend looks like she's getting fucked from behind at this party by a guy with a tail. According to a fortune teller his lifeline indicates he's already dead. Seems like the government may have subjected his platoon to some sort of mind altering drugs they had the good graces to test on monkeys first ('cept the monkeys tore each other to shreds as a result). Old war buddy gets blown up in car. More demon shit. And, etc.

Then, Jacob gets sick (fever of 106) and is submerged in ice water. When he comes to he is living with his ex wife Sarah and says all that other shit was a dream and now we don't know what to believe. And then he wakes up again and is back with Pena. This bullshit is getting confusing. The picture is somber. Lots of quiet moments, subtle scoring, interrupted by the periodic demon shriek type of sound effect. You know, the jarringly loud sound effect meant to wake you if you've fallen asleep (which, I gotta be honest, might happen). Having said all this, I really really like this picture and was most likely blown away by it on my first viewing. The impact is lessened slightly by the fact that I know where it's all heading.

We got probably the best performance of Tim Robbin's career. He's such a sad sack shaggy dog in this thing. Can't help but feel sorry for the guy. We got a terrific Elizabeth Pena as his girlfriend/possible hallucination (spoiler?). We got a funny Danny Aiello as Robbin's wacko chiropractor. Also, early performances from Ving Rhames, Eriq La Salle, and Jason Alexander (as an asshole lawyer). The performances, the visuals, the sounds, the writing all make this thing worth watching on repeat viewings, long after the twist has been revealed. Which I'm gonna do here, so be warned if you haven't seen the thing. It's twenty years old so I'm not gonna feel bad. Holy shit, Jacob's Ladder is twenty years old??? That makes me feel fucking old. Depressingly so. Looks like I'm not that far from the ol' ladder myself.

Well dip shits (just kidding, I love you) the movie is called Jacob's Ladder which if you know your bible is like the ladder to heaven or something. I figured it was a metaphor or some shit, but nope they actually are being literal here. See, Jacob never made it home from Vietnam. Apparently, he was bayonnetted by one of his own mind altered men (if we are to believe this aspect of the story) and then died in a bivouac after fever dreaming this entire picture. Were the scenes with his ex wife actually flash backs? Did he really have kids? I think the whole damned thing was made up. So, anyway, at the end, he realizes that demons were showing up to mess with him until he was ready to move on (to the afterlife)...at which point, an angel(s) will show up to bring him home (i.e. up some stairs and into a bright light led by Culkin who I guess is the angel or something). I guess I was supposed to be happy for the guy, getting to go into heaven and shit, but I was more depressed for him since he was dead and fought the whole movie to come to his senses only to realize at the end that it didn't really matter. Dead. Kaput. The end.

I remember watching this movie at my friend Liz’s sleepover. We were in the 5th grade and her step-dad thought it would be good for us to watch. Well, he was wrong and it scared the bejesus out of all of our friends, but I thought it was really cool. I wonder what it would be like to watch it again as an adult now?

It's definitely worth revisiting. It's impact might be lessened especially since so many movies have copied it (especially that twitchy head effect), but I'd still give it a whirl. Be prepared to be bummed out though.

YAAARG- I have it queue. Tell me nothing!!

Well... that's amazing but honestly i have a hard time determining it... wonder how others think about this..

I'm not sure what Anonymous is getting at but since he's not linking to anything I published it. Anon, can you clarify?