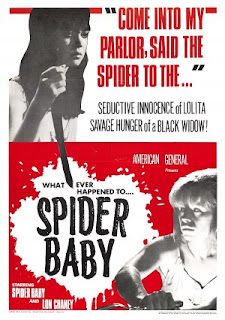 Spider Baby (or, The Maddest Story Every Told) is an oddity. A cult film if there ever was one, complete with a bizarre opening title song, performed by Lon "wolfman" Chaney Jr., star of the film. The picture concerns the Merrye family; which, as the story begins, consists of a trio of inbred "children" (they look to be in their 20s) and their butler, Bruno (Chaney jr). The children are Virginia (who thinks of herself as a spider), Elizabeth (I guess the ringleader), and Ralph (sexually repressed). Together, they live in the old family house, isolated from general society, with Bruno, who takes care of them as an oath to their long dead father (who, by coincidence, still rests in an upstairs bedroom). Unfortunately, the children suffer from a rare disease, a disease so rare that they're the first to have it, dubbed "Merrye syndrome", described as a "progressive regression" of the brain which culminates in deformity (check out the people under the stairs).

Into this mess, arrives a money grubbing aunt looking to cash in on the family fortune, a hitler moustached lawyer and his secretary, and a sincere uncle looking to do what's best for the children, maybe get drunk, and hopefully score with the secretary. This isn't going to end well for anyone.

I tried watching this thing drunk a while back and let me tell you, it plays much better sober. There's too much going on to even think about following any of this loopy shit inebriated. When we're first introduced to Virginia, she's shown catching a mailman in her "web" and slicing off his ear with her "stingers". The picture has a strange sense about it. It's not scary, not overly funny (although it will induce chuckles...maybe a smirk or two), not gory, etc. It is deranged. Clearly having borrowed a thing or two from Psycho (the house, the skeletal parent in the bedroom), Spider Baby can also, most surely, be considered an influence on another classic horror picture, The Texas Chainsaw Massacre. We got a family of cannibalistic inbreds living in the middle of nowhere. We got a classic dinner scene (The dinner scene in Spider Baby provides the funniest moment of the film; it involves salad). And, we got a family living within their own sense of normalcy. Which, is to say completely fucking abnormal.

Anyway, it's an interesting picture. Look for Sid Haig (looking Michael Berryman-esque) as Ralph, who is constantly showing up hiding in the dumbwaiter when he isn't sniffing panties or peeping in windows. It's a great, and silent, portrayal. We actually kind of feel for the guy. Lon Chaney jr is great, and likely drunk, as the loyal butler. Quinn Redeker is blissfully brilliant as Uncle Peter who, even as he's being tied in Virginia's "web" and about to be subjected to her "stingers", is perfectly sure there's a logical explanation for all of this. Redecker also has a great scene where he and the lawyer's secretary drive around town, after a night of binge drinking, looking for a hotel (all have "no vacancies" signs), only to, of course, end up back at the Merrye house for what promises to be a rousing climax.

Spider Baby isn't for everyone. It is, after all, a cult film. If you have an open mind, enjoy some macabre shit that doesn't take itself too seriously, might even laugh at itself, by all means, give this one a shot. Usually, I don't go for the camp shit, but this one felt like it was played straight enough. Not too much winking at the camera, something I have a low tolerance for. Well, that's all I got at the moment. Thanks.
Posted by brian at 4:45 PM

Labels: 1960s, Brian review, horror comedy, I own it you can borrow it

LOVE this movie! Chaney and Haig together are a hell of a dynamic duo. The mailman killed at the beginning was played by Mantan Moreland, by the way, a great comedic actor who appeared in hosts of films back in the day, horror and otherwise. It was nice to see him pop up here as well, but a shame that he didn't get a chance to shine.

I think the weirdest scene was in the beginning when the mailman stops and asks two kids for directions and the mother runs outside and shoos them away. Was it because he was asking about the Merrye house? Was it because he's black? A stranger? I love the look on the mailman's face as he just continues on his way. And the scene where he gets trapped in the window definitely lends itself to some old school comedic acting. Good to know.

I actually love this movie so much I made a musical of it. You may want to check it out. Love your blog by the way. It's turned me on to a lot of movies I might have missed.

Enrique, I am fascinated by the idea of a 'Spider Baby' musical. Would love to hear some of those songs sometime!