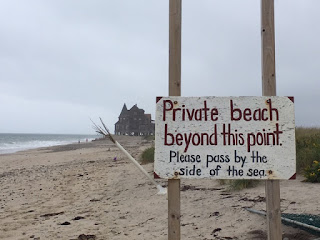 Because nothing says "Schlocktober" like a house that's about to be swallowed by the sea (photo taken by me, today, on Moonstone Beach, RI).  Anyway, what's it been?  Seven plus years?   I remembered my password!  Also, how is Blogspot still a thing?  A lot has happened since I've last posted but let's not recap that shit show.  Let's just cut directly to the chase.  31 days of October, 31 movies.  These posts will be random and, mostly, in blocks.  The actual reviews, mostly, short.  The rules are simple:

1.It has to be a horror movie (loose definition of horror, to include anything I deem horror or, simply, whatever movie I watched thinking it was horror).

2.It has to be a movie I haven't seen before (or, don't remember having seen -- I've seen a lot of movies, some under the influence of something or other).

Jeremy Saulnier (Blue Ruin, Green Room) joins the direct to Netflix game with another subversion of expectations / genre with Hold the Dark.   A man against wolves picture set in Alaska is what I was promised.  We sort of got that only the wolves were like a metaphor or something.  Riley Keough is Medora, the mother of a young child taken by wolves.  She writes (by letter sent via actual mail!) a Farley Mowat type character (Jeffrey Wright) to come hunt, and kill, the wolves that stole her child (also, 2 other children were taken).  Wright's not a killer (he's a naturalist, baby) although he has shot a wolf before ("It sucked" is what I remember him saying about that).  While Russell (Wright) is getting...ahem...acquainted with Medora we get scenes of her husband fighting in Iraq.  Basically, he's a one-man massacre over there.  These scenes are mercifully brief (due to general horribleness - in content, not quality -- these scenes are nothing short of disturbing) and culminate with him getting shot in the neck.  He survives and gets a ticket back to Alaska.  This feels like storm systems about to collide.

Back in Alaska, Medora keeps acting weird.  Maybe not weird.  Why would a woman walking around her cabin naked in front of the guy she hired (yet is up front about not being able to pay.  also, why did he take this "job"?) to kill the wolf that took her son (she knows he's dead) and then sliding into bed with him and guiding his hand around her throat and squeezing her throat with her own hand, while wrapped around his hand, seem weird.  Is that weird?  I don't know, I've never been to Alaska.

Anyway, Russell embarks on his quest the next day and that's when the movie becomes something else.  Something else involves (I guess spoilers) Russell returning after an encounter with wolves that leads him to believe they're not responsible.  Russell finds the boy's body in Medora's basement, Medora has vanished, the cops get involved (the cops are lead by an incredible James Badge Dale), the husband (a seismic Alexander Skarsgard) returns from war, and....well...the bodies pile up in droves (most of them--maybe 20---during one incredibly tense scene that I won't even discuss).

Inuit mysticism, wolf mysticism, culty stuff, bumbling cops, heroic cops and a depressingly desolate picture of how the poor live in Alaska.  Also, some incredible performances in the middle of all this weirdness (standouts are Wright, Keough, Skarsgard, Dale and Julian Black Antelope as the scariest mother fucker in Alaska).  Recommended for wolf fans because no wolves die in this picture, I think.  Spoiler.

Imagine an Aussie shark attack film set in a mall.  And then imagine the balancing act that must have been performed by cast and crew (mainly effects guys) to get realistic sharks to swim by Spencer's Gifts or whatever the Aussie version of Spencer's Gifts is?  Well, I had that idea in my head as I pressed play on this son of a bitch.  The opening is fair enough.  We have a threesome (not that kind, perv) involving two best bro friends and the sister of one of the bros.  One of the bros got engaged to the sister ("I don't regret the engagement but I regret this hangover", he tells bro #2 the next morning).  Then Bro #2 gets chomped to pieces by a shark.  Cue the 3D looking title card.

Anyway, this is mostly a piece of shit because the idea, the image I had in my head, for this movie never exactly transpires.  I know, I know, that's such a bullshit way to view a film.  Enjoy the picture on its own terms.  Or, at least, accept it on its own terms.   Yeah, sorry, can't do it.  The mall has two boring sets.  A flooded parking garage (my favorite set because it involves Bully, referenced above) and a flooded stock room.  These assholes try to work together but they're mostly just assholes.  The film is also really dark, as in darkly lit.  I dug the accents though.  The sharks were finely realized.  It's better than all 17 of the Sharknados.  Recommended for completists of pictures involving dogs being sacrificed to sharks for the greater good.  Sorry Bully.

Remember when TV used to have original movies?  Horror movies??  I was 3 when this gem came out.  I'd rank it sandwiched somewhere between the two Trilogies of Terror.

Story 1: "Second Chances"
This is not horror.  It's a fucking bullshit feel good story that belongs in a bad hour of the 1980s Twilight Zone.  Still, I dug it enough.  Ed Bagley Jr is a strapping young lad (20s) who loves restoring old cars.  He finds one such old car (a 1926 Jordan Playboy) and buys it for a hundred bucks.  The owner says the original owners were killed when the car slammed into a train, way back in 1926.  "Interesting, I didn't want the backstory" Bagley Jr must have thought.  He quickly restores it.  We don't even get a restoration montage.  On his first moonlight drive he begins to notice other old cars on the road.  Suddenly, he's transported back to Cresswell (this has to be Indiana, right?), 1926.  He drives into town and contemplates taking in a movie show when his car is stolen by some local hood.  He jumps in front of the fleeing car and it swerves before continuing on its way.  Distraught, he wanders around town and debates whether to go wake his dad (his dad is maybe 5, probably wise that he didn't do this).  Time travel stories, am I right?  After sleeping on a park bench, he wakes back up in present day (1976, I'm guessing) and goes back about his business.  He dates a local girl, has lemonade with her parents, discovers that her dad owns a 1926 Jordan Playboy, etc, etc.  I don't know, figure it out?  Recommended for time travel completists.

Story 2:  "No Such Thing As A Vampire"
Here's a good one.  Gothic horror.  A creature of the night.  An old castle.  Basically, it's the Lucy stuff from Bram Stoker's Dracula only with a clever twist involving one guy looking at the guy Lucy's dating and thinking "why the fuck is she with THAT guy".  Recommended for...well, you've already watched the first segment, might as well keep going.  Who only watches the middle segment of an anthology??

Story 3:  "Bobby"
Another gem, later remade for Trilogy of Terror II.  A monkeys paw type tale.  Be careful what you wish for and all that.  A grieving mother, home alone, in a mansion sitting on the precipice of a cliff.  At the bottom of this cliff?  Crashing waves.  The way the camera lingers you have to wonder if this'll come into play later.   I mentioned she was grieving?   Her son died.  His name was Bobby.  Drowned.  Maybe from neglect.  She draws a pentagram on the floor while talking on the phone with her husband (away on business of course, this was the 70s).  The pentagram drawing was unsettling because of how casual she was in conversation ("Oh, I'm fine dear...I'll see you when you get back, oh yes, the Peterson's did swing by, we had a nice chat, etc").  She performs a seance and later that night there's a knock on the door.   Who's at the door?  I'm pretty sure it's not the Postman because he didn't ring twice.  Also, he knocked.  Bobby appears normal at first and then.....

Recommended for if you're looking for something to watch after Deathdream.
Posted by brian at 6:17 PM