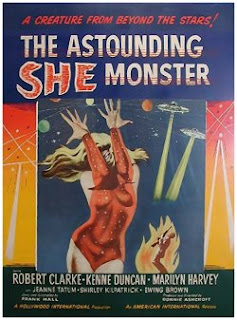 Here's a picture from America's peak science fiction decade that capitalized on our fear of Nuclear annihilation and...um...women leaving the kitchen.  There are three women in this thing and not one of them wears an apron.  We've got Margaret, an heiress to her father's fortune, who leaves the house and is immediately kidnapped.  We've got Esther, one of the perpetrators of the kidnapping who never finds herself too far from a bottle.  And we've got Astounding She Monster, the titular radioactive dame from another world who appears vaguely (blur-ily) naked throughout and possesses a lethal touch.  Also, some men factor into the picture.  A geologist, and a couple hoods working with Esther. Also, there's a collie (I'm pretty sure the actor that played Lassie) and a bear (likely male).

At sixty minutes, the picture flew by while barely qualifying as feature length.   The gang of hoods grab Margaret and hide out in a mountain cabin (where the geologist and his pet collie work) where they plan to extort the wealthy father for ransom.  At the same time, a meteor strikes the countryside, unleashing this Astonishing Radioactive She Woman Creature Type thing upon the region.  She wanders the hills around the cabin a lot.  For most of the run time.  Every so often, one of the hoods ventures out to look for better cell service or something only to succumb to her touch.  Like, they immediately die but not before screaming.  Not a very 50s-ish man thing to do but this movie is nothing if not subversive.  Also, a bear dies screaming.  And, later, Lassie too.

I liked this picture enough.  We've got double crosses, back stabbings, and women drinking to excess.  At the end, I missed the explanation for how the she-monster died so I had to rewind.  I went too far and watched from the point where the bear dies but I thought this was a different scene involving a different bear so I began to wonder how much I was really paying attention.  Anyway, all the hoods die horribly (as much as instantaneous sexually charged death by radioactive she women can be horrible) while Margaret and the geologist throw acid on the she beast, killing it, apparently.  The She Monster disappears but leaves behind a note ("People of earth, we'd like to extend an invitation for you to join the council of planets.  We dig your style, etc").  60 years later, we haven't learned a damn thing.  We're still killing the messenger.  I recommend this for the poster which, incidentally, makes a swell shower curtain.

I really dug the first Hell House LLC so, fuck it, why not check out the second one?  I'm paying for Shudder, after all.  If you remember the first one, it was the story of a haunted hotel in Abaddon, NY (upstate somewhere) where a haunted house company (Hell House LLC) went to set up a haunted house (it's what they did) in the haunted hotel and then everyone got massacred (but it was really just a malfunction according to some shady lawyer).  The lone survivor of the first film (he didn't go tot he hotel, hence the "survivor" part) returns, 9 years later, to the scene of the haunts to uncover the truth about what happened to his friends.  There's also the host of a crime show called "Morning Mysteries" named Jessica, some arrogant Paranormal Investigatory prick named Brock and a couple of nerdy cameramen.  Then there's Molly.  Lovely, lovely Molly who refuses to go into the hotel until she stops refusing.

Even more than the first film, this one is seemingly pieced together from multiple sources (we've got re-used footage from the first film, new footage that the new crew take from inside the hotel, a bizarre talk show featuring the survivor mentioned above (oh yeah, Mitchell), Brock, and the skeevy lawyer (who, all respect to Molly, was probably the real key contributor to this thing), and (most effectively), a Facebook Live video of a local teen who goes into the hotel on a dare.

This time around, the hotel is fully awake.  It wastes no time.  You got the sense, in the first one, it was slowly waking up from a long slumber.  Here it desperately tries to draw victims into it's clutches.  Not sure if you're going to go through with it Facebook Live-er?  Here, we'll open the front door for you.   The scares are bigger and more ridiculous.  The hotel, most bizarrely, gets a James Bond villain moment of over explaining its evil plan.  We've got a portal, more ghost clown-mannequin type dudes, some randomly appearing nooses, characters standing in the dark and staring at walls blair witch style, etc.  Big, BIG, BIGGER scares.  Ultimately, too big, so big that the scares eventually stopped scaring.  I did love the layout of the house, described as being designed in the mold of HH Holmes' "murder house".

One thing really bothers me about a  lot of these found footage type of films though.  This one involves our characters fleeing from ghosts and shit up the stairs of the house and barricading themselves in a room where they huddle for hours.  At one point, the lights go out, and then silence.  The lights come back on.  The barricade, and Molly, are now gone.  No sounds of a struggle.  No scream.  I'm just saying I want one of these type of scenes where a character has night vision goggles.  I want to see the shit that goes down when the lights go out.  How did the ghosts/monsters/clowns accomplish this without a peep?

Oh well, I hope if we get a Hell House LLC III it's set in the wild west or space or some shit.  It's fine.


October 12, 2018
Mandy (2018)
How I watched: I paid for this shit
key contributor: Obviously I'd like to go with Nic Cage but let's go with Johann Johannson (he did the music) because it's his final film score and it was incredible

Here's the plot:  Lumberjack Nicolas Cage finishes a day's work in the woods, gets in a chopper with his crew, and heads home.  In the chopper, he turns down a beer from a coworker (stopped drinking years ago?).  He goes home to some more woods, where he lives with his girlfriend Mandy.  Mandy is fascinated by horror novels, always has one on her person.  One day, she's walking down a road and is passed by some cult-y type guys in a car.  The cult leader is smitten.  Later that night, he commands his underling to bring her to him.  His underling and his underling's underling (think Courtney Gains from The Burbs) venture out to get some help fulfilling this dastardly plan.  He blows into some sort of horn in the middle of some woods.  Moments later, demon bikers appear (they're cenobites on hogs).  The demon bikers break into Cage's cabin and kidnap the both of them, bring them to the cult leader.  Everyone's drugged, Cage is tortured, and Mandy is burned to ashes in front of Cage.  Cage escapes, returns home, downs a bottle of booze, Cage's out for a while and then meets up with Bill Duke (Predator) who gives him the backstory of these badass demon guys, I think.  Then Cage forges some weapons and revenge stuff happens.   Simple enough.

Panos Cosmatos (the director, visionary director is pretty fitting here) is the son of George P. Cosmatos.  We are all our father's sons but none of us are defined by our fathers.  Unless our father directed Rambo II, Tombstone, and Leviathan (amongst many others) then I might be ok with at least being partially defined by him (kidding, Rambo II sucks).  Anyway, Panos directed this (!!) and Beyond the Black Rainbow (unseen by me -- I've heard it described as visionary but it also sounds like something I'd struggle to get into in a what am I watching and why isn't Nicolas Cage in this sort of way).  The plot I described above is the movie but it's also not even close to the movie.  I really don't know how to describe it.  There are callbacks to Evil Dead, Hellraiser, Raising Arizona (I think -- demon bikers, Cage and Mandy reminded me a bit of Cage and Holly Hunter), and some more.  Mad Max Fury Road?    I'd need to watch this thing again to pick up all the references.  The visuals are..insane?  It's a post apocalyptic movie set during a non apocalypse.  Their world (it's a small world) looks lit by fire.  Cage wears two different shirts, one with a tiger and a sports jersey with #44.  The tiger shirt paid off in a scene with an actual tiger.  The #44 is a tribute to Mandy (she wore it at one point, but it's certainly not a sports thing).  Also, during demon battle we get "YOU RIPPED MY FAVORITE SHIRT!!"  The music and the chapters (yes, this picture has chapters) evokes the prog metal of the era (oh yeah, this took place in 1983).  There's animation from time to time.   We've also got the best chainsaw duel since "Lefty" Enright battled Leatherface in the Texas Chainsaw Massacre 2.

Cage gives one of these type of performances every few years (his last such performance may have been in Bad Lieutenant Port of Call New Orleans).  There is only one Nic Cage and when he's fully engaged there's no actor that can go the places he goes.  The height of his Cage-ness may be the bathroom scene when he first returns home (after being kidnapped and watching Mandy burn) and retrieves a well hidden bottle of booze.  Watching him process the last few hours with screams and swigs is an experience we don't often get with movies.  It's a long scene.

I'll leave you with this brief exchange.

Oh, and he also calls a demon biker a vicious snowflake during the heat of battle.