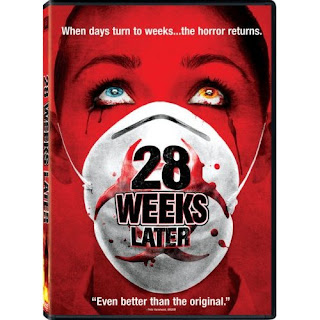 28 Weeks Later is a great sequel, a great movie. Who would have thought the British would be responsible for two of the best horror pictures of this century (The Descent, being the other one)? This movie is so fucking good that it actually manages to surpass 28 Days Later, a film I really like, but which is hampered by a weak final act. Weeks builds to a feverish pitch and sustains it throughout the entire fucking film. In Days, we deserved a finale that obliterated the fuck out of everything that came before it. Instead, we get a strange homage to the weakest of the "Dead" trilogy and Cillian Murphy going all Leo Dicraprio (from The Beach) on us. We're even treated to a Bub-like zomb...infected soldier. Still, 28 Days Later is brilliant for introducing us to the Rage virus. A virus that takes control of it's host within seconds. What would you do if a family member was bitten? In the time they had left, they're pleading with you. Would you kill them? 28 Days Later also showed us haunting scenes of an empty London, scenes one can not soon forget. If that final act had been better, say... set in a mall somewhere as the infected try to get in, it would have been a great picture.

So, to repeat, 28 Weeks Later is a GREAT film. The movie starts out during the events of the first one. A married couple, Don played by Robert Carlyle (Danny Boyle films) and Alice (Catherine McCormack) are hiding out in a boarded up farmhouse with several others. As they begin to sit down for dinner, there is a frantic knocking on the door, a young boy pleading to be let in. No one moves, at first, but Alice insists they let him in. It was a perfectly human decision, but, unfortunately, one they couldn't afford to make. The young boy led the infected to their sanctuary and now a frantic attempt at escape is made. Alice, always the protective mother, tries to shield the young boy from danger, and in the process is separated from Don. He watches, what he thinks is her death as he continues his mad dash to apparent safety, with hundreds of infected in hot pursuit, as the 28 Days/Weeks score kicks in. It's a beautifully choreographed chase scene and a terrific opening to the film.

Then, the title comes up, 28 Weeks Later. We learn that the infected have all long since starved to death. A US led NATO force has occupied London, and slowly they are repatriating the city. Two children, Andy (Mackintosh Muggleton) and Tammy (Imogen Poots) arrive in the city and are greeted by Don, their father. Don has been given a job as sort of a high end maintenance guy. Of course, He has a lot of explaining to do about their mother, about whom, he simply says he "watched her die". During these early repopulation scenes, we are introduced to three american soldiers. Harold Perrineau (that asshole Michael from Lost) plays Flynn, a helicopter pilot who patrols the airspace over London. Jeremy Renner (who has played Jeffrey Dahmer) portrays Sgt. Doyle, a good hearted, heroic army sniper keeping watch from the rooftops. He's also a close friend to Flynn. Rose Byrne (Sunshine) is Major Scarlett, an army scientist charged with studying the Rage virus. I loved the Rear window scenes of Doyle and his buddies on the roof, entertaining themselves by spying on the Londoners in their apartment complex through their rifle scopes.

Children in these kinds of films tend to worry me, but here, we've got two very capable child actors in Muggleton (Andy) and Poots (Tammy). They act as most children would and, here, that involves them sneaking across the river and into the non-secure zone, in an attempt to make it to their home to collect some of their things. Doyle spots them from his rooftop perch and alerts authorities that they've got a couple of "puppies" on the loose. The military gets to them, but not before they make it to their home and make a shocking discovery. Their mother is still alive and perhaps even more shocking, she's not trying to murder them. The military quarantines them all and a quick blood work of Alice reveals that she is infected with the Rage virus, yet, is immune to its effects. So, now, this sets up another scene where Don has some even more serious explaining to do considering he claimed to have watched those fucking infected kill her. The military brass has decided that Alice can't be allowed to live, while Scarlett argues that she must be studied since her blood could hold the key to a vaccine. Her commanding officer tells her to "study the corpse". Before these orders can be carried out, Don sneaks in to see his restrained wife (being a high end maintenance guy, I guess he has a pass key to all areas within the complex. Ok, this is the one plot hole in the movie) and has a touchingly painful reunion. They eventually hug and she forgives him. Then Don goes in for a kiss. Stupid Don. That's a lot of set up for what happens next, but believe me, it's worth it. We now care about all these characters, including those americans, well, only the sympathetic ones (Scarlett and Doyle). Flynn, like Michael from Lost, is still kind of an asshole in this one.

I forget who said this, but I stand by it; For a movie to be great, you need three great scenes and no weak ones. Well, this one has at least four, possibly five, and not a weak one in the bunch. (Great scene #1) A code red is now in effect, and Andy, now separted from Tammy, is sequestered in a room with hundreds of civilians. Mayhem ensues as Don makes it into that same room and starts a chain reaction of vomiting blood and ripping jugulars. It's a brilliant, chaotic scene that is terrificaly scary and leads directly to (Great scene #2) Andy escapes to the surface. The snipers on the rooftops have been ordered to shoot ONLY the infected. This becomes complicated, however, as more people become infected. Eventually, the General orders them to shoot everybody. Doyle, not satisfied with this order, abandons his post and joins the chaos below, but not before blowing away an infected that's about to annhiliate Andy. Eventually, Andy finds his sister and Major Scarlett. Sgt. Doyle unites with them as well, but there's a big fucking problem. Flynn informs Doyle that they have four minutes to get out of there before the entire district is fire bombed. This leads to a terrific scene (not as great as the others), where they have to avoid rooftop snipers that haven't abandoned their post. The scenes of London being firebombed are eerily beautiful and haunting and terrifying. I could go on and on about these scenes, but I have to stop somewhere. Hey, I thought these october reviews were supposed to be short? You're right, so I'm going to try to stop this one soon.

There is a helicopter carnage scene (Great scene #3) that blows away a similar scene in the recent Planet Terror. Unfortunately, it's during this scene that the filmmakers forgot they were making an infected movie and thought they were making a zombie movie as we have mutilated corpses walking around with missing midsections or half a head. I forgive them. The effects were still great though. Finally, there is a scary scene (Great scene #4) that takes place in the pitch black underground of the tube. Major Scarlett is still trying to lead the children to safety. All she has for a light source is the infrared scope on her rifle. We witness this scene through that same scope and we see the children inching their way down a disabled escalator having to step over the charred corpses of the infected. It's a blair witch-espe moment, and features probably the most brutally painful act of violence in the film, an act that isn't much muted by the fact that we have trouble discerning what's happening.

The acting across the board is terrific, but the standout, for me, was Jeremy Renner, as Sgt. Doyle. This guy is going to be a movie star. He simply oozes charisma, charm, and humor. I find it hard to believe that he could pull off playing Dahmer, so I guess I will have to check that one out. Also terrific was Robert Carlyle. In his non-infected scenes, he plays a father wracked with guilt over not staying behind to try to save his wife. I can assure you, I would have been out of there with him and you probably would too, but his children wouldn't understand. The rage virus is a new kind of evil. There really is no fighting it. The best course of action is to hide and wait for everyone to starve. If you run and hide, you might live. If you stay and fight, you WILL die or worse, become one of them. I can relate to Don's decision. I can't really relate to what happens to him after he kisses his carrier wife, but I think it's an interesting thing what the filmmakers did with him. Don is constantly showing up in scenes throughout the film, as if he's tracking his children. It is strongly implied that Don is still, in part, human, still wants to find his children, still LOVES them. Only now, his way of showing his love is to rip off their faces and puke blood down their throats. Still, these infected aren't simply the mindless ragers from the first film. It's almost like they've evolved a little since the first outbreak. George Romero would be proud.

Alas, I'm still a little disappointed that they didn't go with their first idea for this film, events that would occur during the first outbreak of 28 Days Later. British special forces are charged with rescuing the Queen and the Prime Minister. God, a Zombie Queen! I thought I was the first one to think of that!
Posted by brian at 10:51 PM

Labels: 2000s, Brian review, Horror, I own it you can borrow it, Zombies

Yeah, I don't know how anyone could possibly say this sucked? To me, that invalidates their opinions on most anything. Gianni, in the future, come to me. My opinion's the only one that matters ;)

I'M listening to you, King of Gore, even though someone told me today that "28 Days Later" wasn't worth it. I'll still probably rent it this month from NetFlix.

I just watched this movie last night, and really liked it, though maybe it could have been shorter. The end really went nowhere for too long. But its worth watching for that helicopter carnage scene alone. Ridiculous in theory but really, as we say in New England "Wicked Cool" to see on screen.

I'm so glad you commented! Yeah!!!Don't you know that no good movie can possibly be TOO long? Yes, the helicopter scene will go down as one of the great scenes of all time, in my opinion.

Beepy,
Whoever told you that '28 Days Later or Weeks' wasn't worth it must not like movies.