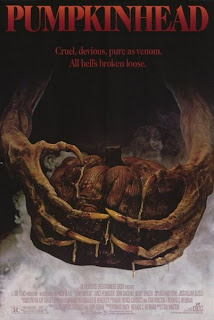 Lance Henriksen stars in this picture.


Oh, are you still here? I would think the realization that one of our greatest living actors is featured in this would be enough. I guess I'll have to write more then. Whatever.

Stan Winston is the guru behind the brilliant visual effects for such pictures as Aliens, Predator, AI, and Leviathan. Actually, he was only responsible for the robots in AI. See, that's what he does. He creates life out of the lifeless. I believe he even did some of the cyborg work in the Terminator films. Finally, he's able to slip into the director's chair and create a movie all his own (with a little help), and no, I am not referring to A Gnome Named Gnorm (I'll review that one when it's finally released on DVD, don't worry). Strangely enough, Pumpkinhead is also the first movie I've reviewed that stars Lance Henriksen, an actor that can make the foulest tripe palatable (if you don't believe me, check out Mimic 3. I, for one, am even looking forward to his appearence in Alone in the Dark II).

This is a terrific horror film, one of the best of the 80s. The story opens in 1957 and the first thing I noticed was the terrificaly rich atmosphere and the great score, full of dark ominous beats and a little twang. Danny Elfman meets Deliverance. A family living in an isolated farmhouse has battened down the hatches for the night. For they're aware that a creature is out stalking the forest searching for the prey it has been charged with killing. In this case, a suspected rapist. A man begins pounding on the door, but the father refuses to help him. The farmer's son asks his mother "why won't pa help that man?" To become involved is to subject yourself, and your family, to Pumpkinhead's wrath. Strangely enough, the atmosphere in the film's opening reminded me of a cross between Sleepy Hollow and The Night of the Hunter.

Cut to present day. The young boy, named Ed Harley, has grown up to be Lance Henriksen. He occupies the same farmhouse with his own youngin (that's what they call them in this picture), a sweet little kid with coke bottle eyeglasses. He reminded me of the kid in Jerry Maguire, only half as annoying. The love is evident between them and only an actor of Henriksen's caliber can get away with a line like "Your gramma used to wash my hands. She had tissue paper skin. It felt so good." Like most horror films, this is a morality tale about those that do wrong and have wrong done unto them. In this case, the wrongers are a bunch of young city slickers weekending in a small southern mountain town where they can practice their dirtbiking and boozing. The group consists of standard horror movie fodder, such as the black leather jacket wearing asshole, the slut, the virgin, the sympathetic curly haired nerd, and so on. We know what's in store for them because they're drinking heavily on the trip to the mountain. On the way, they stop at a grocery store, run by Ed Harley, but promptly run over his son with their dirtbikes. Ok, it was an accident, I suppose. It's kinda heartrending when Harley brings his son home and has to listen to his last spoken word, "daddy."

The real character to blame is the asshole in leather, named Joel. Harley decides to spread the blame around, however, when he calls upon the old witch Haggis, who lives up on Black Ridge. A spindly, awful old witch who, as far as I can tell, has one power. The power to call upon pumpkinhead. Pumpkinhead is buried in an old pumpkin patch out by razorback hollow (the names are fantastic). Linus was nowhere to be found, but I didn't look too closely from under my blanket. Anyway, He brings the body of P-head back to the witch who raises him with a few incantations and some drops of Harley's blood. Harley's blood is key because now he and P-head have a firm bond, almost like blood brothers, but stronger. Pumpkinhead is a horrifying creation, reminiscent, I suppose, of the Aliens in AvP. He's got a similar elongated head and sharp, jutting shoulders. Once he's commisioned to a task (in this case, killing all the city folk) he can't be called off of it. There's a catch, however. As each city folk succumbs to Pumpkinhead, Harley feels their pain. I'm not sure if it was the pain, or just general second thoughts, that caused him to ally with the remaining city people and try to put an end to this night of terror. When they encounter Harley for the first time that night, and he says "come with me...", I really wanted him to finish that up with "if you want to live". It took a few minutes of escaping, but then he finally said "you want to live?" and I felt like cheering.

I truly dig this picture. The characters are all note perfect, especially Henriksen as Harley, but also "Buck" Flowers, who turns in some great character work as Mr. Wallace. Brian Bremer is entirely convincing as Bunt, the young hick boy that allies himself with the city slickers. Also, Florence Schauffler as the old witch, Haggis. It's a relatively gore free film, which I actually appreciated. I mean, there are plenty of impalings and sickening noises, but nothing is lingered on. Mostly filmed at night, so the blood is hard to make out. Pumpkinhead is shown in pieces, and mostly in shadow, until the end as Winston follows the "less is more" philosophy of filmmaking. There's a great scene where some survivors try to find solace in an old wrecked church, and Pumpkinhead stands on the cusp, basically giving the middle finger to a religion he has no part in. I haven't seen any of the Pumpkinhead sequels, but something tells me CGI has found it's place in this world. I'll get to them eventually. Why does this movie continue to be unappreciated?
Posted by brian at 8:32 PM

Labels: 1980s, Brian review, holiday, Horror, I own it you can borrow it, monster

Is there any explanation as to the origins of Pumpkinhead? How was he created? And why?

This sounds good. I may Netflix it next Halloween.

The film doesn't delve too much into his origins. Possibly in the sequels, but I'm not sure. I tend to think that he began as a legend, but enough people believed in him and thus he became kinda true. Similar to "Candyman" I suppose.

This really is an underrated classic. The sequels are horrible and not worth your time. Where did you find that great poster art?
-Dan-

LIfe is short, Beepy. Netflix that shit, like, now.

"One of the greatest living actors"? Awesome.

'Pumpkinhead' may very well be the greatest movie ever made.