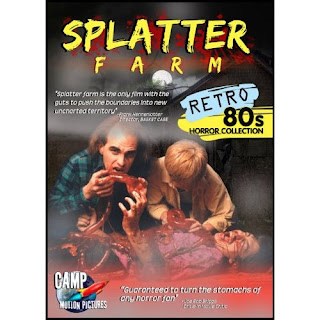 "I rank this with our top favorite pictures, not our top best pictures."
-Splatter Farm writer/director John or Mark Polonia (I couldn't tell
which one)

"If you think Splatter Farm is shit, you should see some of THEIR stuff."
-one of the Polonia brothers responding to rejection by one of
several distributors

This is the most poorly made geek show I have ever seen.

What the hell was Marion Costly thinking? She's apparently the grandmother of one of the filmmakers, I think of Todd Rimatti (who played Jeremy). She plays an elderly farmer that sleeps with the skeleton of her dead husband/brother, drugs and rapes her visiting nephews, and for the coup de grace, has a piece of live dynamite shoved into her privates. Yikes. Perhaps I could understand if this were a studio production, but this is as amateur as it gets. She's certainly not getting paid a dime. The movie was shot in the late 1980s, so I can't imagine she's still alive. This is her legacy. Splatter Farm is her fucking legacy! I can only imagine the pitch. "Hey grandma, me and my buddies from school are making a movie. We need an old woman, are you game? We can't ever pay you, but you'll get to drug us and there will be implied sex, so there is that. Oh, and at the end you get blown up real good. Also, you were raped by your brother and the offspring becomes a horrific serial killer that likes to anally fist his victims and smear their feces all over their faces. He pees on them too, and also has sex with their severed heads. Are you still with me Grams? It gets better. After urinating on and fisting one of your nephews, your inbred offspring stabs him with a pitchfork and buries him in the backyard. He even licks the headless stump of a victim at one point and eats a heart freshly plucked from a corpse. Um, oh, and at the end, we'll force some dynamite in your..ahem...you know where....and well, c'mon Grams, it'll be fun!"

I really have no idea where to begin. This is a terrible film made by retarded high schoolers and, what must be, the single most senile grandmother alive (at the time). It's shot on extremely cheap video. It's clearly inspired by Texas Chainsaw Massacre, although the brothers reference Blood Cult at one point. Yes, I watched the "making of" featurette, which is infinitely superior to the film it supplements, in the hopes of shedding some light on Mrs Costly's decision to appear in this thing. Unfortunately, I didn't find what I was looking for.

I should have turned it off by the fifth minute when Jeremy, after severing the hand of an obviously fake corpse, sticks that same hand in his unzipped fly, a fly that remains unzipped the entire picture. I strongly believe these kids (now likely in their late 30s) should be put away for a few years. I can't really object to the content. Yeah, it's extremely taboo and disturbing, especially coming from the minds of children (although, the brothers Polonia were sporting some pretty nice scumstaches), but it still could have been presented in an entertaining way, shot somewhat competently. No, these guys should be put away for putting their grandmother in this film. There's no way she had any clue what she was getting into. At just one hour, this thing was an hour too long. As obscene as the content was, it still moved at a snails pace. Why didn't I turn it off? Why?? The best moment of the film was when one of the brothers says "I'm sorry to interrupt lunch, but I got to take a shit." Yes, the cast was full of retarded rednecks. I won't complain about the acting. It's terrible, but that's to be expected. The gore effects were inventive, I suppose, when you consider the age of the filmmakers. Which is to say, NOT very inventive at all.

I guess I found out what my limits are.

Poor, poor Marion Costly. May you rest in peace.

I'm planning on reviewing/recommending a couple of movies on Halloween. I recommend this thing only if you're a masochist. Please don't give them your money. Based on the featurette, the Polonia brothers seem to have retired. I certainly don't want to give them any motivation. I'm thinking about scratching up the copy I got from Netflix.

Epilogue:
I just checked IMDB. The Polonia brothers have been consistently releasing movies EVERY year. Splatter Beach is their latest effort. Never mind.
Posted by brian at 9:08 PM

Could it be? Could this film be worse then Die You Zombie Bastards? You should Netflix all of the bros movies. Come on..SplatterBeach could be good right? Maybe have some nudity? Some naked girls on the SplatterBeach would be nice. I find it hard to believe that this movie pushed you to your bad movie limit. Say it isn't so?
-Dan-

You would think there might be nudity in something called SplatterBeach. Unfortunately, after looking at and, especially,listening to the Brothers Polonia, it becomes doubtful that these guys have ever talked to a woman (other than grandma).

This might be worse than Die You Zombie Bastards.

I guess any horror movie proclaiming itself "retro" probably wouldn't in normal instances be good...

I am really sorry I didn't let you put this on, the night of my party. I mean what says PARTY! more than feces getting wiped on victims faces and grandma getting dynamite in her vajayjay. where do you find these movies?

If you come to poker night I could get it again!