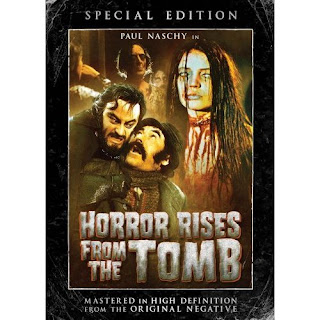 It's possible there's a good movie in here somewhere but I kind of doubt it. Unfortunately, the version I saw, distributed by St. Clair Vision, ia an indecipherable mess. Where the fuck was the 70's euro-sleaze I've heard this described as? I came to this thing based on Paul Naschy's reputation (The Werewolf vs. The Vampire Women) and Helga Line's beauty (The Loreley's Grasp), but left scratching my head in both perplexity and boredom.

What we have here is a low rent version of Black Sunday, only with the promise of tits. The best part of the picture was the prologue, set in France, which sounded like it was narrated by Vincent Price. A parade of Knights leads a warlock (Naschy is Alaric) and his sorceress-wife (Line) to their excecution; through some woods, across a stream, over a hill, into a field. The thing takes fucking forever. Finally, they arrive at the tree of execution, a dead, creepy old thing. The crimes are read before sentencing is pronounced. Crimes like the drinking of human blood, the eating of human flesh, being a vampire, a lycanthrope, etc. Funny how I always thought the last two were mutually exclusive. I haven't seen them, but maybe there were werewolf-vampire hybrids in those Underworld pictures. Anyway, Naschy is decapitated and Helga is....well, I'm not sure what the hell happened to her. I think she was hung upside down or something, but the camera cut to some other scene before I could figure it out. At least they got to curse their persecuters before they "died".

Suddenly, the viewer is transported to Paris, present day (if this were the 70s). Hugo (ancestor of Naschy's warlock, played by Naschy) and his painter friend, Maurice (ancestor of the guy that put Naschy to death played by the guy that put Naschy to death) are reunited with their women (Sylvia and Paula). Without wasting time, Hugo decides it would be fun to have a seance so they can contact his deceased ancestor and figure out where his head was buried. Seance's never seem to work out very well for anyone involved, at least in motion pictures they don't. Maurice, at least, has the good sense not to get involved. Unfortunately, that damned warlock comes back and somehow possesses him while he's miles away working on his new painting. Upon being possessed, his frantic brush strokes eventually reveal the headless warlock holding Hugo's severed head. I know! Let's all take a trip to Hugo's mountain chalet where the head is rumored to be buried and investigate further!

The last few (dozen?) or so films I've reviewed have all seemed to rely on nudity, gore, sex, stuff like that and frankly, while I'm never going to get sick of it, I can't help but wonder, "will the reader?" I've almost forgotten what it's like to write about a picture that can survive on it's own laurels without having to rely on a gimmick like tits (and the occassional bush). Well, this picture is bad without those things. Apparently, I watched the butchered cut so this review can only refer to what I've seen. This is no indictment on Carlos Aured (the director) who I'm sure did fine work. This feels like a cut that would be released for Television and St. Clair should be ashamed of themselves for releasing it in such a condition. The other pictures in this pack seem untouched, so I guess the only excuse might be that the unedited version cost too much. Fuck man, it looks like they copied this thing from an old VHS tape that someone used to record it off the TV back in the 80s. Thankfully, they also edited out the commercials. Not only are we, the viewers, deprived of some fabulously beautiful women in the buff, but we also don't get to see them torn to shreds for having the gall to take off their clothes. The quick, and extremely awkward, cuts do nothing but render the work utterly imcomprehensible. I had no idea at times if a certain character had just died, fornicated, or eaten dinner. This is a dreadful release.

Well, I forgot that I actually needed to finish this review. Here I am, a few days later, and I don't really have anything to add. It's possible if I go back and watch the uncut version that I would enjoy this more. Not just possible, it's highly probable. Unfortunately, the story is just too damned derivative for me to care enough to do that. The characters are, for the most part, boring or just plain unbelievable. At one point, Hugo tries to convince Maurice to walk into the girls room wearing white sheets...you know, give 'em a good scare. Maurice quickly dismisses the idea as absurd...as if ghosts really dress like that.

The one moment I thought worked in the film was when Naschy (as Count Alaric de Marnack aka "the horror that rose from the tomb") calls upon his dead victims to walk the earth as zombies and assault Hugo's chalet. Any other picture would have had these zombies turn on their creator but I'm glad this one skirted that particular cliche. Later, there's a bit of a twist when Maurice (having been mind controlled by Naschy's Alaric) kills Hugo and then fights (mentally) with his possessor, eventually freeing himself and joining forces with the last girl, a lovely young dollface aptly named Elvira. Helga Line (who is pretty hot I think) is more exotic than scary and does her best with lines like "I'm rabid, I want her heart." She's just not naked enough for my tastes. I'm fairly certain this is a bad picture. It's not scary. It's not campy enough to be fun. There's little gore and littler nudity, i.e. none (a product of this shoddy release I'm sure). The ending involves Alaric cowering, like Dracula from a crucifix, from an amulet which has some sort of power over evil. A little more of this and the picture would have been a laugh riot. So, I can't really recommend it. Unless it's on television and you're paralyzed or can't reach the remote or something, go ahead and skip it.