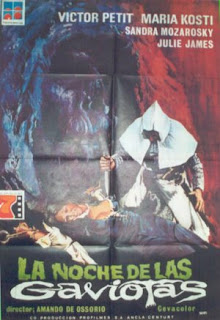 The fourth and final film in Amando De Ossorio's blind dead quadrilogy, Night of the Seagulls, is a bit of a strange bird. Apart from the eyeless dead Templars, this doesn't really feel like a "blind dead" movie. It's almost as if De Ossorio wished to make something a little more ambitious, something a bit more Lovecraftian (this has some elements typical in Lovecraft stories; a coastal town with a deep rooted secret to go along with references to an ancient sea god and pagan rituals). I'm sure the budget wasn't there. So, what we're left with is a film in which the dead Templars worship an oceanic deity, which was not mentioned in any of the previous three films. In the previous film, The Ghost Galleon, they sailed the high seas looting the world of stupid, often topless, dames. Still, I got the feeling they were mostly godless in that one. Also, why the hell would dead things, doomed to walk the earth for, what appears to be, an eternity actually choose to worship a god? It makes no sense. He's clearly not treating them to a pleasant afterlife. The Devil in Miss Jones is the only film I've seen that portrays purgatory as something worth experiencing.

Anyway, continuity has certainly not been a strong suit for this series. In Tombs of the Blind Dead, the first and still best of the series, the Templars had their eyes pecked out. In Return of the Blind Dead, they were burned...the eye holes then cauterized. In some films, they can survive the sunlight. In Return, it kills them. Fire seems to do the trick in every film. Since these guys are blind, one would think not screaming and standing still would be pretty helpful. In the first film it doesn't really matter, as depicted in a great scene, as the dead can hear and follow the beating hearts of their victims. This detail is largely ignored in the follow ups. Another element forgotten after the first film is that to be killed by the blind dead turns you into one. Except for the blindness. That is their own cross to bear. Someone get these guys a blind dead seeing eye dog for chrissake.

They may not have eye dogs, but they do have horses. In the second picture, it's established that, yes, their horses are, in fact, also dead. They're also fiercely disloyal. Apparently unable to discern flesh from bone as countless potential victims steal them away as their tormentors are forced to blindly pursue. The horses can see fine but are only able to gallop in slow motion, an unfortunate side effect to being dead I guess.

So, what the fuck is the weirdly titled Night of the Seagulls about anyway? A young doctor and his blondish wife travel to a seaside village to replace the doctor who worked there before who was said to be getting too old for this shit. It's a strange little village with little stone buildings, a plethora of beautiful virgins, and an old lady that mans the local five and dime but refuses to sell any of her products to outsiders. It's quite possible the old hag refered to them as "outlanders". The doctor and his wife settle in to their cozy new stone walled apartment on the outskirts of town and wonder why no one seeks treatment, why won't the old bitch sell them medicine, and, lastly, what's with that strange procession heading to the beach every night led by, what appears to be, a virginal nineteen year old woman dressed in a white (see through!) gown? Also, what's with the squawking of those fucking gulls? What the hell are they doing flying at night? According to this movie, that is something they never do so what the fuck gives man?

As it turns out, every seven years or so (no, it's exactly every seven years) the "blind dead", for seven consecutive nights, come out of the sea to claim a virgin so they can hack her to pieces and feed her to their precious sea god. That sea god can't be bothered to come out of its abyss, however, so I guess he sent in a party of crabs to grab the remains and scuttle the pieces home. I'll be honest here for a moment. It would be pretty stupid and absolutely nonsensical if these dead templars actually came out of the sea. That is from the plot description on the back of the dvd case. I think that plot description was written before anyone realized this would be just another "blind dead" picture. These guys come out of their crypts like they do in every other picture from this series and I'm pretty sure this scene was just stock footage used from the first two. Oddly, it still fucking creeped me out.

One thing that wasn't made immediately clear is that the "blind dead" only claim their virgins for seven consecutive nights every seven years. In return, I guess the men of the village are allowed to live and bang gorgeous women so that they can keep producing these virgins. Anyway, for about an hour or so, I was under the assumption that the villagers sacrificed a virgin to the blind dead every night, for every year, pretty much until time stops. I was a little confused. With a population of about thirty, at least half of which are old men, older women, and sluts...they would somehow need to produce 365, of age, virgins per year. The math just didn't add up. I actually think this would be a difficult task to accomplish every seven years. If it was just one or two virgins I might buy it. Also, if you're a virgin living in this village what the fuck are you saving yourself for? I am booking my flight today. *

There is a bit of a somber mood that hangs over this picture. It's probably a product of one of two things;

1) it's always sad when a good thing is coming to an end.

2) this isn't really the movie De Ossorio wanted to make.

I actually think it's more the latter than the former. In addition, the theme of not being able to achieve eternal rest leaves me feeling a bit morose. Why are the seagulls flying at night? The spirits of the dead virgins are trapped in them, called upon each night of the blind dead sacrifice, to sing for the new victims, to welcome them into their midst. Not only were these poor fettered vixens horribly slaughtered but now they must spend an etnernity as a shit eating bird chasing down little crackers and eating off soiled diapers from the dumpster. These girls were hot once and now they repulse me. Sad.

This is one of the better entries in the series. Of the four, only Tombs of the Blind Dead is better. I enjoyed the dynamic of the village. I loved Teddy, the slow witted fellow who performed odd jobs for the new doctor and his wife. His first appearence, as a disembodied head in the window, is great. He tries to help the young couple but unfortunately lacks the ability to explain what they're up against. I fell in love with Lucy, the young woman (virgin, of course) that also took a liking to the doctor and his wife. I would have happily taken her flower to save her life or for whatever.

The blind dead makeup is, as always, fantastic. The atmosphere is near perfect (a little too perfect at times as it became hard to figure out what was going on in some dark, i.e. poorly lit, scenes) and the gore, while probably more tame than the first two films, is still splendid. Lots of prosthetic breasts cut open so the templars can evict the still beating heart, suck out its juices, and, like Mogwai, gain their victims strength and, i guess, virginity? I enjoyed this one. It's rare these days to see a horror film where virgins are punished so I guess, for that reason, it felt kinda fresh. I'd like to see a movie where the broad that saves herself for marriage is punished immediately after consummation. That would be original. What about the girls that have sex frequently, but not so frequently that other girls refer to them as whores? I guess in the late 60s and early 70s there was probably a lot of fucking around without condoms and such. The people making pictures were probably getting laid a lot as well...and they were like, what's will all you girls that won't put out? You know what, I'm gonna savage you prude bitches in my next picture. I'll rip off your tits and eat your heart, etc. Then, in the 1980s, all these guys and gals that were fucking around left and right started coming down with AIDS and so we entered the boring safe sex/no sex generation. In that decade, the survivors were almost always virgins while the girls that liked to fuck around were always being killed off in horrific fashion. I think a slut in one of those Sleepaway Camp movies even asks her next conquest if he's got AIDS. The 1990s was a shitty horror decade that mainly stuck by the final girl=virgin motif. Today, now that people have forgotten all about AIDS, it's ok to glorify hot slutty chicks once again. I can't really think of an example off the top of my head, it's been a long day, what can I say? Perhaps we'll get some in the comments. I'm glad to report that people are finally getting laid again and that the next sexually transmitted epidemic is probably just over the horizon (I guess AIDS was cured or swept under the rug or something). I'm not getting laid though, just other people. Anyway, Night of the Seagulls is a good one. I like the title the more I think about it.

*the majority of this paragraph is rendered moot at the 1:10 mark of the picture. sorry.
Posted by brian at 8:53 PM

Way to call yourself out, Casanova.

We can't all be the "man" you are Mr. Anonymous.

I agree that Night of the Seagulls was a lot better then the Ghost Galleon but neither can match the awesomeness that is Tombs of the Blind Dead.