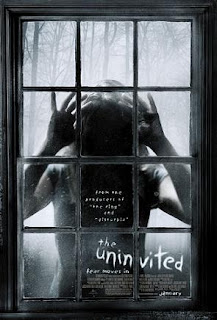 Normally I don't go for these American remakes of Japanese ghost pictures. First, I'm not much in the way of a fan of the originals. Muddled stories and creepy ghost children don't really do it for me. If I had known The Uninvited was a remake, I probably would have skipped it without a second thought (except that it was lent to me, and I always watch movies I borrow). Shit man, I can't take another watered down PG-13 remake of a film I probably wouldn't enjoy anyway (would have been my thought if I knew this was a remake). Well, it turns out...this is a remake of a South Korean film (A Tale of Two Sisters). Not Japanese. Also, I guess the directors (The Guard brothers) are British or something. Not American. Fuck, maybe I'll find some enjoyment here after all.

This is my kind of ghost story. The kind that stars the hauntingly adorable Emily Browning. Holy shit, what eyes. What a mouth. What hair. I started to creep myself out when I realized the only other thing I've seen her in is Lemony Snicket when she was about 14. She's 20 now, so it's fine. Anyway, Browning plays Anna, a troubled teen living in a mental facility as a result of a recent tragedy that claimed her mother. After some time has passed, Anna is finally released into the care of her father (the always reliable David Strathairn) and is surprised to learn her father is shacking up with her mom's former nurse, Rachel (Elizabeth Banks). Also, living with them is Anna's sister, Alex (Arielle Kebbel). Their house exists somewhere along the New England (Maine?) coast I'm guessing, since Strathairn is some kind of writer. There's a boathouse, a rocky shore, a winding drive, etc. Perfect shit for a ghost story.

It doesn't take long before Anna begins having visions. First, she sees her dead mother. Her mother points the finger at Rachel. Anna and Alex investigate. All signs slowly point to Rachel starting the fire that killed their mother. They investigate some more, steal the batteries from Rachel's dildo, and so on. I got to be honest here. This is where these pictures usually lose my interest. A fucking ghost can't rest in peace while it's murderer steals it's life. So, the ghost starts pointing the finger, presenting subtle clues, etc. Why can't the ghost just come out and say it. Maybe give them something obvious. Instead, it just sorta freaks them out, nearly gives them a heart attack by appearing at the most inopportune moments, etc. Also, I hate that scene that appears in most of these movies where characters look at microfilm to figure out the source of evil, what happened to those ghosts to make them so mad, why was their house built on an Indian burial ground/morgue, etc. Still, this movie has all that shit but at least it's done pretty well. They stick with the ol' Dad's girlfriend is a nurse who murdered some kids type of cliche, which isn't quite as well used as the others. Still, despite this stuff I'm not too fond of, we still got Browning to look at. Seriously, star in the making.

This one is full of some good creepy visuals. I particularly liked the visitation Anna receives from her just recently deceased boyfriend with the recently broken back. There's some good shit at a funeral involving a little dead red head that leads Anna to even more microfilm and thus more clues about Rachel's past. Of course, dad doesn't believe her. Why should he? She's certifiable. Certifiably adorable.

Here's another confession. I guessed immediately that Alex wasn't really there. Well, not in the sense that an alive human being would be. See, I assumed she was a ghost too. No one, besides Anna, spoke to her directly, responded to her questions , or questioned that she and Anna were a bit too close, if you know what I mean (sharing a bed, the tub, etc). I have no problem admitting when I'm wrong. I was. Sort of. The Uninvited ends in an unexpected way. Actually, it's pretty shocking when you think about it. Sorta horrific. A little heartbreaking even. They fooled me. Good job.

This is a good one made better by low expectations. If anyone but Emily Browning had starred in this thing I probably wouldn't have jived to it as much. It's not really my type of picture, but it's probably near the top of it's type. Of all the remakes of far east ghost-type horror films I'd put this one near the top, a few notches below The Ring. It's PG-13, sure, but it's not noticeable. I was surprised that it didn't pull it's punches at the end.

Labels: 19 days until Halloween, Brian review, ghost, Horror, I borrowed this from some guy named Jules

Huh. I thought both kids in "Unfortunate Events" were pretty homely (at least compared to the kids in the recent Peter Pan movie). Guess I should check this out.

I dunno, I just found her look interesting. Something about her.

Shit, coming up with a horror movie to write about every day might actually be kinda tough considering I don't really have the time to watch one every day. 3 down, 16 to go. Or, is it 17?