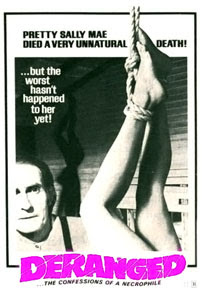 Ed Gein would be a rich man if he were allowed to capitalize on his crimes (and still living). I can't think of one american murderer whose had more pictures inspired (if that's the right word? nope, pretty sure it isn't) by his work. Of course, the two famous ones are Psycho (which focuses on the mother/wanting to be a woman fixation) and The Texas Chainsaw Massacre (which focuses on the wearing other people's skin fixation). People tend to forget that Buffalo Bill from Silence of the Lambs wanting to make himself a skin suit so he could become a woman is also an act inspired by Ed Gein. Psycho II and Psycho III were probably influenced as well, but I'm not sure, haven't seen them yet...it's just a hunch. Anyway, Ed Gein was a pretty sick fellow. One might even say he was "deranged".

This is an odd movie that's probably in bad taste simply because they stick so close to the actual events. Well, actually, let me elaborate a little. It's in bad taste because it plays like a comedy while sticking so close to the actual events. Technically, Gein wasn't even a serial killer. He was only ever convicted of killing two people (I looked this up on wikipedia). In this picture, he kills three. He was probably known more for being a graverobber and upholstering his furniture, lampshades, etc with skin. To the people in his town, he was a bit strange but apparently not strange enough to prevent him from getting jobs on the babysitting circuit.

The only other Gein adaptation that comes this close to being an accurate depiction is the Steve Railsback picture, In the Light of the Moon. Railsback was great in that thing but it was a depressing afair, which probably served the material best in most opinions. In Deranged, Roberts Blossoms plays Ed Gein, only they changed his name to Ezra Cobb. The picture opens with Cobb taking care of his bed ridden mother, the only woman he'll ever love. She dies and it's apparent that Ezra was the only one that loved her as well. The funeral service is pretty strange with Ezra's boyhood "friend" Harlon and Harlon's wife being the only other guests. They comfort Ezra with lines like "she was a good woman" which ring hollow. I don't even think the minister showed up. A few days later, Ezra exhumes Ma Cobb's corpse and brings her home. He's pulled over by a cop for speeding who asked Ezra about the strange smell to which Ezra responds with an explanation about having to transport a dead hog. Later, he apologizes to his mother for calling her a hog. I'm pretty sure that was supposed to be funny. It was.

The movie gets even weirder though as some kind of newsman-narrator makes the occasional appearence to give this a sort of docu-drama feel. Ezra will be inside minding his own business sewing skin into a blouse and this news guy will suddenly appear in his house, in the foreground saying things like "and Ezra was spiralling even further into madness" or some shit like that. I kept waiting for Ezra to notice the guy, say something like "where the fuck did you come from" and then sew his ass into a hat.

The tone is all over the place. Harlon and his wife insist that Ezra start dating so he can be married like a normal middle aged crazy person. Ezra goes on a date with an overweight woman claiming he "likes em' fat, like a hog" (also, similar to Buffalo Bill). The woman is deranged in her own way though. She's a widow and insists that her and Ezra have a seance so they can talk to her husband and his mother. Like all movie seances (see Horror Rises from the Tomb), this one ends poorly. The woman claims that her husband is telling Ezra to have sex with her. At first, Ezra is all for it but then his mother tells him that this woman is a bit of a whore and that the wages of sin are syphillus and death. The scene plays like a comedy until Ezra pulls a gun out from his pants (not the kind she was hoping for), places a pillow over her head and shoots her three times. That part was pretty harsh, but then the feathers from the pillow float up into the air in front of the framed photograph of the, now, dead woman's husband who is surely thinking "not exactly what I had in mind." The movie is constantly mixing scenes of shocking brutality with dark humor like that. I appreciated it at the same time I was thinking this is probably wrong.

Blossoms is great in this role constantly referring to people he meets as "sir", even those younger than him. He tries to hit on a waitress but when that doesn't work he just slashes her tires and then abducts her when she comes to him looking for a ride. I wonder though if Gein would have been a more successful killer if he knew how to cover up his actions because Ezra is pretty terrible in this department too. Harlon notices a story about the missing waitress in the newspaper and Ezra says that she's up at his house but Harlon just laughs it off. Good ol' Ez. Such a card.

And, then we come to poor virginal Sally Mae, the girl hanging upside down in the poster. At this point, the picture decides to get serious. Sally's a pretty young thing, working at the local hardware store where Ezra comes in to purchase some anti freeze. While he's there, he loads a bullet into a .22 takes aim on poor Sally and knocks her out with what I'm thinking is a pretty weak rifle. Then there's a chase through the woods, a bear trap incident, and finally a point blank shooting that finishes the job. It's an effective set piece that probably belongs in a different movie. Sally was so cute and innocent that if you're not rooting for her to survive you're probably no better than Ezra. To further illustrate his ineptness, he left a shit load of evidence at the hardware store and then hung up poor Sally in the barn with the barn door wide open. Also, I'm not sure, but I think it might make you a transvestite if you dress up in women's skin?

Anyway, this is not what I expected. Frankly, I thought it would be boring. It's not perfect although it's the rare movie that can make you feel sick and laugh almost simultaneously. At one point, Bob Clark (Deathdream, Black Christmas, Children Shouldn't Play with Dead Things) was attached to direct but he thought the material was too bizarre. I guess he hadn't seen Deathdream yet. Alan Ormsby wrote this and Deathdream...and, in an interesting bit of trivia, the director of this picture played Santa Claus in Clark's A Christmas Story (according to imdb). If you've got a stomach for some truly macabre and funny shit then I recommend this without reservation. If not, then what the hell are you doing here anyway?

Final note: The subtitle to this thing is "the confessions of a necrophile" but, as far as I could tell, he never confesses to anything (at least he's never taken seriously) and he never has sex with a corpse. It's possible they filmed those scenes but left them on the cutting room floor. We may never know.
Posted by brian at 5:45 PM

Wow- that poster sure couldn't be used today without three quarters of the country hitting the ceiling. The Kendall would probably show it though.

And correct me if I'm wrong, but wasn't Argento, back in the day, genuinely talented? I agree with Dan thath the second half of Mother of Tears was disenchanting.

I don't know...maybe. I thought the ending when Asia and the detective were crawling through the shit to escape and then when they finally do all they can think to do is laugh was pretty brilliant.

It's also possible that my infatuation with Asia Argento clouded my judgement. Look up the poster for 'Boarding Gate' and you might understand.

Um ... dressing up in the SKIN of a woman makes you a transvestite? Talk about three quarters of the country hitting the ceiling!

I'm pretty sure dressing up in the skin of a woman makes you a homicidal nutjob, not a transvestite.

If the trannies ever find this site, they're gonna burn you in effigy!

burned in effigy by a bunch of trannies? that sounds hot.