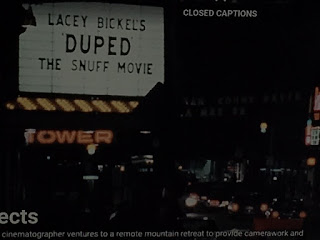 "Effects" is a little nifty hang out picture that portends to examine the idea of a film director as a god type figure.  The filmmaker, and team (lots of people from the Romero Pittsburgh class of filmmakers) have made a picture about a picture within a picture.  On the one hand, we've got Lacey (the director, played by John Harrison --Romero guy) who seems to be making a film about a woman that seems to be having a breakdown.  He brings in a cinematographer / effects guy played by Joseph Polito (best known as Captain "choke on it" Rhodes from "Day of the Dead").  Other characters of note are Nicky (played by Tom Savini, legendary effects guy), a total douchebag who will stop at nothing to bed Celeste (Susan Chapek), the film's gaffer and also Barney, a fuckin' weirdo.

So, we got the one film they're making and then on the outside we got a control room (unknown to most of the crew) where Lacey seems to take a god's eye view of all of the proceedings in and out of his own film.    Also, Lacey and crew get drunk one night and then after asking them if they wanna see a real film, he shows them what appears to be a super grainy snuff movie.  Things spiral a bit from that point ("oh, it's not a REAL snuff film, I was joking...what if I told you I made the thing and that girl is like totally fine").  Pilato is great in this thing.  If you've seen "Day of the Dead" you might think he's only capable of acting at a single register, 100 octane or whatever.  Here, he dials it way down and actually gives a pretty compelling performance as the guy that gets a little more than what he bargained for when he takes this job ("I've got one question, if this guy Lacey is fucking loaded then how come we're shooting this thing on 16 mm with a one-man crew?).  Also, there's some most dangerous game type shenanigans in here somewhere.

The gore, for the most part, is light but we do get to see some great effects work in action (mostly some explosions and plenty of blood squibs).    It's almost like a how-to course for low budget filmmakers.  I even think I learned what a gaffer is.   What, it's some kind of....sound guy or something?   This thing also ends on a terrific comedic beat. 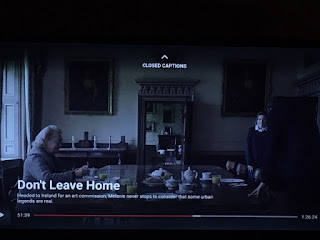 Here's another little horror film.  Let's face it, they're all little.  This one reminded me a bit of "Hereditary" in the way all the shots seemed painterly and crafted to the most minute detail.  I paused several times to see if I was missing a ghost or some shit in each frame (see above -- and, no, I never found one).  Also, there's an artist (Melanie, played by Anna Margaret Hollyman) that works in recreating miniatures.  The pre-title sequence (it's a long one, 16 minutes before the title appears on the screen) involves a family in Ireland whose daughter disappears while gazing into a Christ statue out in the woods.  There's a Priest involved.  A creepy painting also.  The Priest is thought to be guilty, but he's exonerated, leaves the priesthood, and goes into hiding.  Back in the States, Melanie is obsessed with cases of disappearing Irish children.  So obsessed, that she recreates a miniature of the woods, statue, girl, etc.  Unfortunately, she's very poorly reviewed so she heads off to Ireland where the lady of an old estate promised she had investors who will buy the piece from her.  The title slaps on the screen as the plane shoots across the sky.

Upon arriving at the estate, the priest is there.  Also, a mute butler/driver.  The lady (her name's Shelly) makes sure that no one knows where Melanie is.  That's the first clue she should probably turn around and head home.  She explains it's because they don't want anyone to know where the Priest is.  Also, the director does a lot of weird zooming in and out of windows where Shelly is and sometimes isn't leering.  It's all a bit unsettling, in a mostly good way.  This is the kind of picture that layers one dream on top of the other.  Normally, I hate that shit but here it works, for the most part.  Also, there's an ominous path that leads to an even more ominous idol (the one from the painting -- I'm not up on my religion so, full disclosure, I wasn't sure if the idol was Christ or the Virgin Mary).

All of this felt like it was leading to something extra cult-y but where it goes actually seems more spiritual and, for good or for worse, less horror-y than I had hoped.  The lead-up to the finale is eery, for sure, but never really scary.  The scares are all on the edges, mostly outside of frame.  Unsettling more than unnerving, I guess is how I want to put it.  And then the "investors" show up and the thing almost becomes a comedy.  Those scenes were a bit reminiscent of "Get Out", albeit an extremely white "Get Out".  So, this one was mostly good. 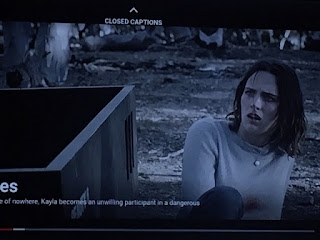 Finally, bring on the gore.  I had a blast with this picture.  The movie opens in the middle of nowhere with a couple of mutant-looking motherfuckers (pretty sure they're just wearing masks, but I wasn't completely sure) fighting over who gets to kill some fleeing women.  All around, we got white birch trees.  One of the women is dealing with a nasty leg injury.  Are these mutants fighting over the right to kill or is one trying to stop the other one from actually making a kill?   And then we get some weird video game credits.

Flash forward or sidewards (but certainly not backwards) and we're in the city following Kayla and Maddie after they've left a bar.  They fight (verbally, they're friends after all) and go their separate ways.  Kayla hears Maddie cry out, runs towards here, but too late.  They're both abducted.  Some flashing images later (involving eye stuff) and Maddie finds herself in a black box in the middle of nowhere (you might recognize the white birch trees).  She meets a couple of other women in the same predicament (obviously).  Why are they here?  What's the point?  Let's figure this shit out, they say.

I don't know.  I loved this one.  It's got a bit of a "Cube" vibe.  Characters wake up, not sure where they are, have to work together to stay alive....and then they start working against each other because, turns out, that's also what they need to do to stay alive.  Also, we got mutants hoping to kill them and that actually get to kill (some of) them...in awful, brutal, and...dare I say...fun and inventive ways.  Oh yeah, Kayla's also an epileptic, doesn't have her medicine.  That shit might come up later (conveniently and inconveniently, depending on the character).  The mutants are scary enough.  Ok, they're not mutants...they're guys with masks.  We got a guy in the baby faced mask (from "Brazil"), we got a guy with a pig face, and we just got a bunch of scraggly faced masks.  Some guys carry scythes.  Some guys carry axes.  Some guys use their bare hands and a birch tree (in the 2nd nastiest kill of the picture -- the nastiest involves the axe).  Also, why did that one guy's head just explode for seemingly no reason?  Why is any of this shit happening?  Some great performances (especially by Airlie Dodds as Kayla) and some incredibly visceral action.  A lot of practical effects, as far as I could tell.

Honestly, I could probably watch all 31 movies this month without leaving Shudder if I wanted to.   "The Furies" (not to be confused with the 1950 Anthony Mann Western of the same name) is a really solid fucking picture.
Posted by brian at 6:40 PM